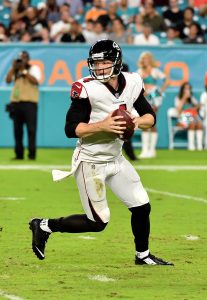 Simms, the son of former NFL great Phil Simms, appeared in a handful of games for the Jets between 2013 and 2014. He also had a previous stint with the Falcons as well as the Bills, but those unions did not result in live action. The quarterback, who turns 29 in September, currently represents the fourth QB on the Falcons’ depth chart with Matt Ryan, Matt Schaub, and UDFA Alek Torgersen slotted ahead of him.

Scantling, a University of Georgia product, is a former decathlete. The Falcons were hoping to channel his raw ability into football talent, but he’s apparently not there just yet.

The Falcons waived a number of players yesterday in anticipation of the roster deadline, and they’ve continued to cut players today.

The team has also put a pair of players on the injured reserve: