The Cowboys have signed third-round defensive tackle Osa Odighizuwa (Twitter link via Michael Gehlken of the Dallas Morning News). With the UCLA product in the fold, the Cowboys now have just two unsigned draft picks to go. 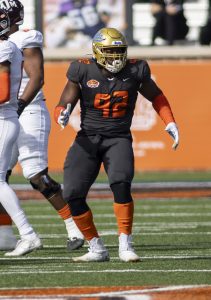 Odighizuwa, the younger brother of former Giants defender Owa Odighizuwa, comes with four years of collegiate seasoning. And, for the last three years, he’s served as a starter for the Bruins. Even in a pandemic-shortened season, the 6’2″, 280-pound lineman managed to shine. In seven games, Odighizuwa notched six tackles for loss, four sacks, and 30 total stops. In total, he’s got 37 appearances to his credit with 120 tackles, 27.5 TFL, 11.5 sacks, two forced fumbles, one fumble recovery, and a defensive touchdown.

The Cowboys’ defense could certainly use the help and new DC Dan Quinn is a big believer in Odighizuwa’s ability. Currently, he projects to be the first DT off of the bench, behind starters Carlos Watkins and Trysten Hill. Sixth-round pick Quinton Bohanna also figures to be in the mix.

Bohanna, Odighizuwa, and the majority of the Cowboys’ draftees are now taken care of. Two of their third-rounders — defensive lineman Chauncey Golston and cornerback Nahshon Wright — remain as the last stragglers. 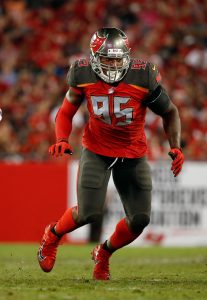 The Buccaneers have agreed to sign free agent defensive end Darryl Tapp, according to Greg Auman of the Tampa Bay Times (Twitter link).

Tampa Bay is dealing with several injuries along its defensive line, the most severe of which may be to edge rusher Noah Spence, who left Sunday’s contest with a shoulder injury and will likely miss an extended period of time. Ryan Russell is also coming back from a shoulder issue, while veteran Robert Ayers is managing a knee injury (and was able to play in Week 7).

Tapp, 33, has already had multiple stints with the division rival Saints in 2017, but hasn’t actually played a down for New Orleans since last season. He’s been more or less a rotational defensive end since 2009 (with his best and most productive years coming as a starter for the Seahawks in 2007-08), and that’s likely the role he’ll play for the Buccaneers. Tapp, who has 162 career appearances under his belt, will play behind Ayers, William Gholston, and Will Clarke in Tampa.

This isn’t the first time the Bucs have sought to add help on the edge of their defensive line. Free agent pass rusher Lamarr Houston worked out for Tampa Bay earlier this month before signing with the Texans, while the Buccaneers auditioned defensive ends Wallace Gilberry and Owa Odighizuwa alongside Tapp on Tuesday, per veteran NFL reporter Howard Balzer (Twitter link). Tampa also looked at cornerbacks Josh Johnson, Deji Olatoye, and Raysean Pringle, plus defensive tackle Marquavius Lewis.

The Patriots’ tryouts on Monday included former Giants defensive end Owa Odighizuwa, as Mike Reiss of ESPN.com tweets. There’s no word yet on how the tryout went, but the Pats could use some pass rush reinforcements following the events of this past offseason. 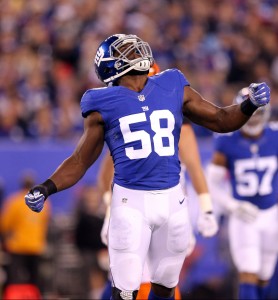 For much of the offseason, it seemed like Odighizuwa was prepared to walk away from football at the age of 25. After taking some time to mull it all over, Odighizuwa was a late entrant to Giants camp and put himself in the mix to make the final 53-man cut. He struggled in practice, however, and his four-game ban for PEDs was the final nail in the coffin.

Odighizuwa was a third-round pick of the G-Mne in 2015. He appeared in four games as a rookie and 14 last season, though he didn’t make much of an impact. His suspension expired this week, so he’ll be ready to rock immediately if New England chooses to sign him.

The Giants have waived Owa Odighizuwa. The move was expected after the defensive end was hit with a four-game suspension on Monday.

For much of the offseason, it seemed like Odighizuwa was prepared to walk away from football at the age of 25. After taking some time to mull it all over, Odighizuwa was a late entrant to training camp and put himself in the mix to make the final 53-man cut. Word is that he was struggling in practice, however, and was far from a lock to stay with the team past the Saturday deadline. Once word of the PED ban came down, it was a fairly easy call for GM Jerry Reese & Co.

Odighizuwa will be free to sign with any club if he clears waivers in the next 24 hours. Odds are, he will.

Giants defensive end Owa Odighizuwa has been suspended for the first four games of the season, according to an announcement from the league. Odighizuwa will be eligible to return for the Giants’ Oct 8 game against the Chargers.

Odighizuwa has violated the league’s PED policy, according to the league office. It’s another strange turn for Odighizuwa who hinted at retirement this offseason. After taking some time to address personal issues, Odighizuwa rejoined the team in camp this summer with an eye on playing.

So far, the 25-year-old has been running with the third-string defense and hasn’t been able to really get going. Because Odighizuwa was far from a lock to make the 53-man cut, this could wind up being the end of the line for him in New York.

“Yeah, I really don’t know the nature of that,” Garrett said (via Jon Machota of The Dallas News). “Obviously we have a lot of respect for Revis. He’s been a great player in this league for a long time.”

“I wouldn’t even speculate on anything like that,” he said. “That’s in the front office. They are the ones that decide those things.”

Predictably, Marinelli acknowledged that there could be a role for the seven-time Pro Bowler.

“Any great player you can,” he said. “It doesn’t matter where he’s at, what position.”

As we wait to see how this plays out, let’s take a look at other notes from the NFC East…