Texans safety K.J. Dillon has suffered a torn ACL, according to Aaron Wilson of The Houston Chronicle (on Twitter). The rookie’s season is over thanks to the injury and he will be placed on injured reserve shortly. 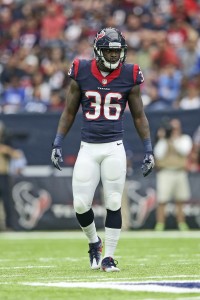 Dillion, a fifth-round pick, first broke out as a junior at West Virginia. In 2014, he totaled 57 tackles, 7.5 tackles for a loss, and two interceptions. He followed that up with 54 tackles, 6.5 tackles for a loss, and two more interceptions as a senior. The Texans were using Dillion in a reserve role and giving him some time on special teams this year. In five games on the active roster, Dillion wound up with just two total tackles.

In other Texans news, there is reportedly some tension between head coach Bill O’Brien and starting quarterback Brock Osweiler. Of course, after last night’s comeback victory over the Colts, everything might just work itself out in Houston.