12:25pm: To accommodate Hunt, the team has placed safety Lonnie Ballentine on the injured reserve, reports Berman (via Twitter). The 2014 seventh-round pick has played in four games during his three-year career, compiling three tackles.

Berman also notes that running back Jonathan Grimes is not traveling with the team and will not play this weekend. Hunt will presumably take his spot on the running back depth chart behind Lamar Miller, Alfred Blue, and Tyler Ervin.

10:32am: As the Texans current crop of running backs recover from their various ailments, the team has added some reinforcement to the backfield. According to Mark Berman of Fox26 in Houston (via Twitter), the team has promoted running back Akeem Hunt from the practice squad. 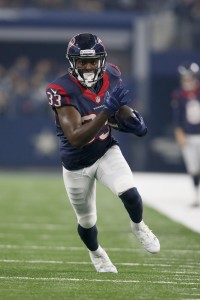 Hunt, a speedy second-year back, will provide the Texans with some insurance in case one of their running backs can’t go this weekend. Starter Lamar Miller is recovering from a shoulder injury, but Aaron Wilson of the Houston Chronicle reports that the veteran is hoping to play against the Jaguars. Meanwhile, fourth-string running back Jonathan Grimes missed a practice this week due to an illness.

The former Purdue standout joined the Texans as an undrafted free agent in 2015 (following a brief tenure with the Ravens and Giants). In seven games as a rookie, Hunt ran for 96 yards on 17 carries, and he added another 39 yards via six receptions. The running back scored a pair of touchdowns during the Texans preseason finale this year, but he was ultimately cut prior to the regular season.

The broken foot Kevin Johnson sustained during the Texans’ overtime victory over the Colts last weekend resulted in the team relocating the cornerback to its IR list, John McClain of the Houston Chronicle reports (on Twitter). 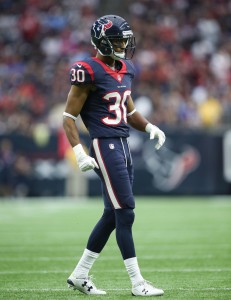 Houston activated safety Lonnie Ballentine to replace the second-year corner on its active roster. Johnson would be eligible to return after eight games but isn’t expected to play again this season, making him an unrealistic candidate to take advantage of the new IR policy.

This represents another critical loss for a Texans defense that entered the season with lofty aspirations after a strong 2015. Johnson rated as Pro Football Focus’ No. 8 cornerback through six games, and he’ll join J.J. Watt as players who will no longer contribute to the team’s AFC South title push this season.

The Texans also lost safety K.J. Dillon to a torn ACL against the Colts. Charles James figures to have more responsibilities going forward as the Texans attempt to fill the void of a player who’s proven thus far to be a quality investment via first-round pick. Houston’s already received standout work from former UDFA A.J. Bouye, whom PFF rates as its No. 1 corner thus far this season.

The No. 16 overall pick in 2015, Johnson made 21 tackles and deflected three passes in the Texans’ first six games. He also recovered a fumble. Johnson started 10 games as a rookie and played in all 16, intercepting a pass and registering 52 tackles.

A 2014 seventh-round pick, Ballentine spent the first six games of the season on the Texans’ PUP list after a significant knee injury ended his 2015 season. He tore his MCL and PCL while also dislocating the meniscus in the badly damaged left knee.

After taking a low hit to his knee on Sunday, Titans quarterback Marcus Mariota continued to play, so the Tennessee coaching staff is “cautiously optimistic” about the status of that knee, says Mike Florio of Pro Football Talk. According to Florio, Mariota is undergoing an MRI today to determine the extent of the injury, and the club is hoping that it’s just an MCL issue, which can heal with rest.

Here’s more from out of the NFL’s South divisions:

Although multiple reports have suggested that free agent signal-caller David Carr would like to end up on the team that drafts his brother Derek Carr, perhaps serving as Derek’s backup, that’s not necessarily the case, according to Adam Schefter of ESPN.com. Schefter tweets that the two brothers’ destinations aren’t related, and that David intends to sign with a club prior to draft day.

As the elder Carr continues to search for a new home, let’s round up a handful of updates from around the NFL….