The Texans have placed rookie wide receiver Braxton Miller on injured reserve and promoted fellow pass-catcher Wendall Williams from the practice squad to the active roster, the club announced today. 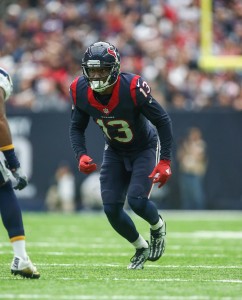 Miller, a third-round pick out of Ohio State in the 2016 draft, didn’t make much of an impact during his first season in the NFL, and injuries certainly played a factor in his lack of contributions. Hamstring issues limited Miller earlier in the season, and now it’s a shoulder ailment that’s ending his season for good. In 10 games this season, Miller played primarily as a slot receiver, and managed 15 receptions for 99 yards and one touchdown. The 24-year-old also returned three kickoffs and one punt, and played 32 special teams snaps in total.

Williams, 26, signed with the Texans as an undrafted free agent out of Cumberlands this spring. After being waived at final cutdowns, and spending a few weeks with the Jets’ practice squad, Williams has spent most of the year on the workout circuit.