The 49ers have released offensive tackle Erik Pears and waived tight end Rory Anderson, the club announced today. As such, San Francisco’s roster now sits at 77 players, meaning it will need to cut two more players to be in roster compliance by Tuesday’s 3pm CT deadline. 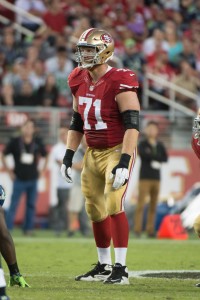 Pears, 34, started all 16 games for the 49ers last season after agreeing to a two-year $4.7MM deal that included $1MM in guarantees. While his availability is to be lauded, Pears graded among the league’s worst offensive lineman, according to Pro Football Focus, struggling in both the run and pass game in his more than 1,000 snaps. San Francisco will incur $250K in dead money as a result of Pears’ release.

With Pears out of the picture, the 49ers are looking for a swing tackle, a role that the recently un-retired Anthony Davis could fill, as Cam Inman of the Bay Area News Group tweets. While Davis is expected to start at guard, he could potentially move out to tackle if the Niners were to suffer an injury on the outside. In addition to starters Joe Staley and Trent Brown, San Francisco also has Alex Balducci, Colin Kelly, Fahn Cooper, Norman Price, and Josh Theus capable of playing tackle.

Anderson, 23, was selected in the seventh round out of South Carolina in the 2015 draft. He never played a snap during his rookie season, as he spent the entire year on injured reserve.