The NFL today informed the Falcons they’ll forfeit the first three days of OTAs in 2017 for violating NFL-NFLPA work rules for excessive contact in practice. Atlanta is the second team to receive punishment for that infraction following sanctions against the Seahawks. The Falcons aren’t happy about the punishment, but they did not face the heavy fines and draft penalties that the Seahawks did as repeat offenders.

“We take player safety very seriously and work hard to ensure that we are in compliance with league rules,” the Falcons wrote in a statement Thursday.

The Rams have released offensive lineman Garrett Reynolds from injured reserve, reports Dov Kleiman of RantSports (Twitter link). Reynolds landed on IR when the Rams worked their roster down to 53 players in time for last Saturday’s deadline. 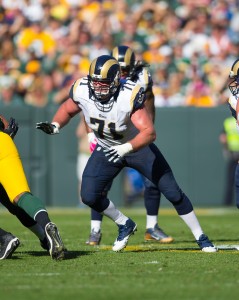 Reynolds, who has played six NFL seasons, joined the Rams on a two-year, $2.2MM pact in March 2015. In his lone season with the club, he logged 15 appearances, tied a career high with 10 starts, and earned a solid grade (80.6) from Pro Football Focus. Reynolds capped off his short Rams career when he suffered an undisclosed injury in their Sept. 1 preseason finale.

The 29-year-old Reynolds spent the first four seasons of his career in Atlanta, which took him in the fifth round of the 2009 draft, and started in 23 of 42 appearances. Between his stints with the Falcons and Rams, he saw action in 10 games and made four starts as a member of the Lions in 2014.

Here are some details on a few of the contracts agreed to or signed within the last few days:

4:54pm: Reynolds’ new deal with the Rams is a two-year pact worth $2.2MM, a source tells Rand Getlin of Yahoo! Sports (Twitter link). The contract has a max value of $4.2MM.

3:46pm: The Rams have officially signed Reynolds, the team announced today (via Twitter). According to Jim Thomas of the St. Louis Post-Dispatch (via Twitter), the club continues to consider other linemen, including Tim Barnes, who isn’t out of the picture in St. Louis quite yet.

3:18pm: After hosting him for a free agent visit, the Rams are expected to finalized a deal with offensive lineman Garrett Reynolds, according to Adam Caplan of ESPN.com (via Twitter). It was Caplan who first reported earlier today that Reynolds was headed to St. Louis.

Reynolds, who started 10 games for the Falcons in 2013, lost his starting job late in the 2013 season, despite grading as Pro Football Focus’ 32nd overall guard (subscription required). The 27-year-old was subsequently cut by Atlanta and picked up by Detroit, where he spent the 2014 season as an occasional starter at right guard and right tackle for the Lions.

Reynolds’ ability to play both guard and tackle could come in handy for the Rams, who are in need of players at both spots. Greg Robinson and Rodger Saffold figure to man left tackle and left guard respectively, but Jake Long and Scott Wells were cut by the club, and Joe Barksdale and Davin Joseph are free agents, so center, right guard, and right tackle are still up in the air. Reynolds may not be penciled in as a starter, but he should have the opportunity to compete for a regular job.

If Brandon George of The Dallas Morning News were in charge of the Cowboys, he would have tendered a contract offer to cornerback Sterling Moore. Cowboys coaches didn’t see enough from Moore in 2014 to want him back, apparently, but at a cost of $1.542MM, he could have given them inexpensive depth at the position. Moore, who visited the Steelers earlier this week, is in San Francisco today meeting with the 49ers, tweets Ian Rapoport of NFL.com.

Here’s more on a handful of free agents around the NFL: