Veteran cornerback Jamar Taylor is visiting with the Seahawks today, per Mike Garafolo of the NFL Network (via Twitter). After losing former slot corner Justin Coleman to the Lions, Seattle is looking for reinforcements in the secondary.

Taylor, a 2013 second-round pick, spent the first three seasons of his career with the Dolphins before being dealt to the Browns. He was productive during his two seasons with Cleveland, including a 2016 campaign where he had three interceptions and 13 passes defended. He finished the 2017 season having appeared in a career-high 16 games and finishing with a career-high 62 tackles.

Last May, the Browns traded him to the Cardinals, who hoped to deploy him as their No. 2 CB opposite Patrick Peterson. Taylor agreed to a significant pay cut to facilitate the trade, but things did not go well for him in the desert. Arizona cut him in November, and he caught on with the Broncos to finish out the 2018 season.

Still just 28, Taylor provides experience and can be a solid contributor in a CB rotation.

In other Seahawks news, Ian Rapoport of NFL.com tweets that safety Taylor Mays, whose last NFL action came in 2015, will work out with the team tomorrow. Mays a former USC Trojan, could be reunited with Pete Carroll, who was USC’s head coach during Mays’ collegiate career.

The Patriots‘ decision to deactivate Rob Gronkowski for Thursday night’s game could cost him major money at the end of the season, ESPN.com’s Mike Reiss points out. Gronkowski has played in 70.5% of the team’s snaps this season, which puts him on pace for the lowest possible incentives tier of $6.75MM. He can still reach the first ($10.75MM) and second tiers ($8.75MM) based on receptions, receiving yards, touchdowns, or All-Pro selection, but those markers will also be hard to reach without a certain volume of snaps.

The Patriots are going to take a look at free agent Taylor Mays. The safety has a tryout for the Patriots at their rookie minicamp, a source tells Ian Rapoport of NFL.com (on Twitter). 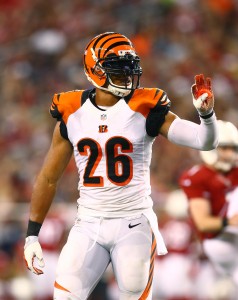 The Bengals signed Mays last year with the knowledge that he would have to serve a four-game suspension for substance abuse. In the summer, they released him when they learned that Mays had yet another drug suspension heading his way. It all added up to an eight game ban, but we did not see Mays back on the field in 2016. Mays spent time in a treatment facility instead and he is hopefully back on the right path.

In his last season, 2015, Mays bounced all around the NFL and was yo-yo’ed on and off of the Raiders’ roster multiple times. The 28-year-old recorded 23 tackles and 5 passes defensed in his 14 Raiders games. The Patriots are now curious to see what the former second-round pick can offer.

It’s not common for veterans to partake in rookie minicamp, but it’s also not unprecedented. While Mays tries to catch on with the Pats, former Vikings running back Matt Asiata will be participating in the Lions’ rookie camp.

Taylor Mays Out Of Treatment Facility

Free agent safety Taylor Mays has spent the last several weeks in a treatment facility and is now finally healthy, according to Ian Rapoport of NFL.com (on Twitter). Mays comes off of suspension on Monday and several teams are showing interest in the former Bengal (Twitter link). 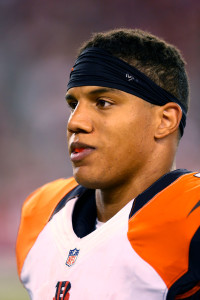 Mays was flagged for two substance abuse policy violations this year and his second suspension is about to wrap up. Rapoport notes that the Bengals kept an open mind on Mays and says that they “may have interest” when his suspension is up. It’s not clear if Rapoport has direct knowledge of the Bengals’ interest level or if that is just informed speculation.

This year, the Bengals were counting on Mays to help support starters George Iloka and Shawn Williams at safety. The Bengals already knew that they would be without the 28-year-old for the first four games of the 2016 season, but they decided to cut bait when they learned that his ban had doubled. In less than a week, we should know whether Cincinnati is willing to go down that road again.

TUESDAY, 4:37pm: Mays will be suspended for an additional four games, giving him an eight-game ban in total, Howard Balzer of USA Today tweets.

MONDAY, 3:42pm: The Bengals signed safety Taylor Mays this spring knowing that he would be suspended for the first four games of the 2016 season due to a substance-abuse policy violation. Over the weekend, Cincinnati cut Mays before he could even suit up for training camp. The move was a head-scratcher for some, but it makes a lot more sense now. The Bengals dropped Mays because he is facing another drug suspension on top of his original four-game ban, according to Mike Garafolo and Ian Rapoport of NFL.com (on Twitter).

The Bengals were counting on Mays to help support starters George Iloka and Shawn Williams at safety. Now that he’s out of the picture, the Bengals currently have a seventh-round rookie, a sixth-round 2015 pick, and a ’15 UDFA in reserve at the position, as Roster Resource details.

Despite the headaches Mays has caused, the Bengals have not ruled out giving hm another shot if he is ready to play football after his suspensions are served, Rapoport hears (Twitter link).

The Bengals signed Taylor Mays knowing he’d be suspended for the first four games this season due to a substance-abuse policy violation, but they’ve now opted to cut the journeyman safety, Jim Owczarski reports (on Twitter).

Mays’ employer for most of his career, the Bengals will only incur a $25K dead money charge and will save $855K. Cincinnati reacquired Mays on a one-year worth $840K.

Mays played with the Bengals from 2011-14 before departing as a free agent and enjoying a nomadic 2015. He signed with the Vikings, Lions and Raiders only to be cut by each franchise, with Oakland bringing him back after injuries depleted its back line. Mays managed to start in five games and play in 14 with the Raiders, and he functioned decently when called upon despite being cut on several occasions last year.

Originally a second-round 49ers selection in 2010, Mays will now search for another team. With the suspension looming, that might not be as easy as it was last year. But the former USC safety has not experienced too much trouble finding teams willing to take a chance on him.

The Bengals, though, are now devoid of much seasoning at safety behind starters George Iloka and Shawn Williams. Reggie Nelson‘s departure to the Raiders and now Mays’ release leave the defending AFC North champions with a seventh-round rookie, a sixth-round 2015 pick and a ’15 UDFA, as Roster Resource details.

APRIL 15: Nearly a month after they reportedly agreed to terms with him, the Bengals have finally made it official with Mays, signing him to a one-year contract (Twitter link). Details on the deal can be found right here.

MARCH 17: The Bengals have agreed to terms with Taylor Mays, according to Rand Getlin of NFL.com (on Twitter). The deal brings Mays back to the team where he spent the 2011-2014 seasons.

Today’s agreement comes on the heels of this week’s news that Mays will be suspended for the first four games of the 2016 season. The safety was apparently suspended for a violation of the league’s substance abuse policy.

Here are some specific details on contracts that have been agreed upon or signed within the last several days:

Free agent linebacker Courtney Upshaw will meet with the Jets on Thursday, reports Peter Schrager of FOX Sports (on Twitter). Upshaw has made 64 straight regular-season appearances (51 starts) since Baltimore took him in the second round of the 2012 draft. The 26-year-old recorded 51 tackles, two sacks and two forced fumbles last season. In terms of overall performance, Pro Football Focus ranked Upshaw 84th out of 110 qualifying edge defenders for his work during the 2015-16 campaign. He was an honorable mention on PFR’s Top 50 Free Agents list.

The latest on some other unsigned players around the NFL: