DL Steve McLendon Not A Lock To Make Buccaneers Roster?

The Buccaneers may have re-signed Steve McLendon earlier this offseason, but that doesn’t mean the defensive tackle is a lock to make the roster. As Greg Auman of The Athletic writes, Tampa Bay’s defensive line depth could lead to an “interesting battle for roster spots.” 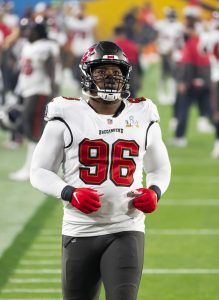 Ndamukong Suh, Vita Vea, and William Gholston are locked in as starters on the defensive line, leaving space for only three (maybe four) of Rakeem Noches-Nunez, special team ace Patrick O’Connor, 2020 sixth-round pick Khalil Davis, veteran Jeremiah Ledbetter, and a handful of others. McLendon could find himself in that “others” category, especially considering his age (35) and his minimal signing bonus ($137.5K). While the veteran is “well-liked and respected” by teammates, McLendon could still find himself on the way out of Tampa Bay thanks to his minimal cap charge and/or the organization’s decision to pivot towards youth.

The Jets traded McLendon and a 2023 seventh-rounder to the Bucs last October in exchange for a 2022 sixth-round choice. It amounted to a virtually no-cost pickup for Jason Licht & Co., providing them with an accomplished run-stuffer to fill in for Vita Vea. After reuniting with Todd Bowles, McLendon notched 17 tackles and two tackles for loss in the regular season. In the playoffs, he tallied five tackles and three quarterback hits en route to a Super Bowl ring.

The Buccaneers have re-signed defensive tackle Steve McLendon, as Rick Stroud of the Tampa Bay Times tweets. The veteran returns on a one-year deal, setting himself up for his first full season in Tampa.

The Jets traded McLendon and a 2023 seventh-rounder to the Bucs last October, in exchange for a 2022 sixth-round choice. It amounted to a virtually no-cost pickup for Jason Licht & Co., providing them with an accomplished run-stuffer to fill in for Vita Vea.

After reuniting with Todd Bowles, McLendon notched 17 tackles and two tackles for loss in the regular season. In the playoffs, he tallied five tackles and three quarterback hits en route to a Super Bowl ring. Not bad for a player who started the year with one of the league’s worst teams.

Steve McLendon will no longer be in a contract year. The Jets announced they’ve come to terms with the veteran nose tackle on a one-year extension. McLendon re-signed with the Jets in March, agreeing to a one-year, $2.5MM deal.

Although McLendon will turn 34 in January, he is in his fourth season as a Jets starter and is filling this role for a second coaching staff. The Joe Douglas–Adam Gase administration clearly has a similar view of the 10th-year veteran compared to that of the Mike Maccagnan–Todd Bowles regime.

McLendon has registered a sack and 11 tackles for the 2019 Jets. He has started 42 games for the Jets since signing with New York in 2016. Previously, McLendon played six seasons with the Steelers. He served as a first-stringer for multiple Pittsburgh playoff teams.

In 120 snaps this season, McLendon has graded well in the view of Pro Football Focus. The advanced-metrics site slots McLendon as its No. 12 interior defender — well ahead of every other Jet defensive lineman.

The Jets have re-signed defensive tackle Steve McLendon, according to a team announcement. It’s a one-year deal with a base value of $2.5MM, according to Manish Mehta of the Daily News (on Twitter). McLendon can earn up to $1MM with incentives, bringing the maximum value of the contract to $3.5MM.

McLendon, 33, did not record a sack last year, though he did appear in all 16 games (including 14 starts). He logged 34 tackles in total and graded out as Pro Football Focus’ No. 29 ranked interior defender. That score, buoyed by his strong run defense, actually put him one slot ahead of teammate Leonard Williams and several places above Henry Anderson. All three players are set to return to the Jets following Anderson’s reported three-year, $25.2MM agreement.