On Tuesday, the Buccaneers officially placed defensive tackle Vita Vea on injured reserve. The former first-round pick will miss the remainder of the season after suffering a broken leg against the Bears. 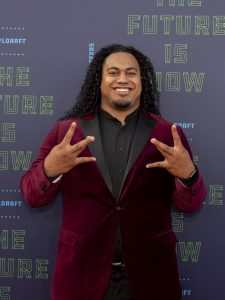 Vea started in all 16 of the Bucs’ games last year and all five of this year’s contests. Thanks in part to Vea, the Bucs have boasted one of the league’s best run defenses. Playing at the nose tackle spot, he managed two sacks this season to bring his career total to 7.5. One of those sacks came on Thursday night, prior to the season-ending injury.

The injury is unfortunate for obvious reasons, but also for contractual reasons. Vea will be extension-eligible after the 2020 season — he’ll also be light on leverage. The Bucs will probably let things play out, since they have Vea under contract in 2021 at a cap figure of $4.7MM. Meanwhile, Will Gholston and Rakeem Nunez-Roaches will likely take on larger roles up front.

Vea will be joined on IR by linebacker Jack Cichy, who suffered a hamstring injury. Fortunately, that injury doesn’t look like a season-ender and he’ll be eligible to return in as little as three weeks.