A couple weeks ago, we wrote about the NFL finalizing plans for a regular season game to take place in Germany. Well, according to Ben Fischer of Sports Business Journal, the home team of that game will be none other than the Tampa Bay Buccaneers.

No word has been announced yet on who their opponent will be, but the Super Bowl LV champions will be present at FC Bayern Munich Stadium next season. The NFL will have one more game in Munich and two in Frankfurt over the following three seasons.

The 2022 NFL season will see four other games on foreign soil. In addition to the game in Germany, England will host three games and the league will return to Mexico City for the first time since 2019.

Here are a few other notes from around the NFC, starting with a note out of the Lone Star State:

Eagles tight end Jason Croom is believed to have suffered a season-ending knee injury (Twitter link via NFL.com’s Ian Rapoport). This was, unfortunately, expected after Croom was carted off during Thursday night’s preseason game against the Patriots. 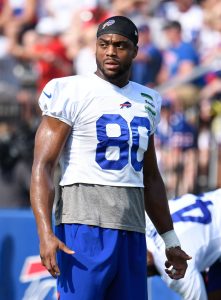 Croom will undergo an MRI to confirm his status, but non-contact knee injuries like this usually signal a torn ACL. If the scans prove the issue to be serious, the Eagles will place Croom on injured reserve between now and Monday morning.

Croom entered the league in 2017 as as an undrafted free agent with the Bills. After bouncing between the practice squad and active roster, the Tennessee got his chance to contribute in 2018. He ultimately led all Bills tight ends with 22 receptions, 259 yards, and one touchdown (he also had a pair of fumbles). Last year, he only registered one catch for the Eagles — a three-yard TD grab against the Ravens.

It’s not a given that Croom would have made the 53-man roster, but he was at least in the mix following the last round of cuts. The injury leaves the Eagles with five TEs on the roster — Zach Ertz, Dallas Goedert, Richard Rodgers, Jack Stoll, and Tyree Jackson.

Jason Croom is re-signing with the Bills. ESPN’s Field Yates reports (via Twitter) that the tight end is inking a new one-year deal with Buffalo. Croom was an exclusive rights free agent.

Croom joined the Bills as an undrafted free agent out of Tennessee in 2017. After bouncing between the practice squad and active roster during his rookie campaign, Croom finally had a chance to contribute in 2018. He ultimately led all Bills tight ends with 22 receptions, 259 yards, and one touchdown (he also had a pair of fumbles).

Croom dealt with a hamstring injury for much of last year’s offseason workouts, and the injury ultimately forced him to be placed on the injured reserve. As a result, the 26-year-old didn’t end up getting into a single game last season.

Croom will be re-joining a relatively deep tight ends corps in Buffalo. The current depth chart is led by the likes of Dawson Knox, Tyler Kroft, and Lee Smith.