The 49ers hosted a pair of wide receivers on visits this week and agreed to terms with one of them. Marcus Johnson is signing with San Francisco, Field Yates of ESPN.com tweets. 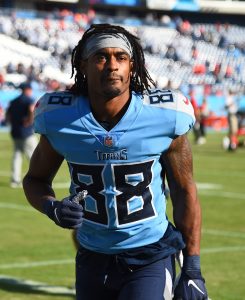 This will end a lengthy AFC South stay for Johnson, who spent last season with the Titans and the previous three with the Colts. Johnson, 27, is on track for his sixth NFL season. He and Malik Turner visited the 49ers earlier this week.

Part of an Eagles-Colts trade in 2018, the former UDFA is coming off a season in which he was placed on IR twice. In between those stints, Johnson made a notable contribution for a Tennessee team playing without A.J. Brown and Julio Jones. Johnson’s five-catch, 100-yard day helped the Titans to a narrow win over the Saints, a victory that ended up mattering significantly in the AFC South champions’ pursuit of the conference’s No. 1 seed. Johnson landed on season-ending IR shortly after that performance.

A Texas alum, Johnson served as a part-time contributor with the Colts during Jacoby Brissett‘s second starter season and Philip Rivers‘ Indianapolis one-off. Between the 2019 and ’20 slates, the 6-foot-1 target combined for 31 receptions, 532 yards and three touchdowns.

San Francisco has a low-cost receiver room, at the moment, and is set to return its top pass catchers from 2021. Deebo Samuel‘s status figures to change that, with the team planning an extension — one that may now be more costly, given the receiver market’s early-offseason explosion — for its versatile star. The 49ers have Brandon Aiyuk under contract through at least 2023, and emerging complementary performer Jauan Jennings is attached to an ERFA tender — one he has not yet signed.

On Wednesday, the 49ers met with free agent wide receivers Marcus Johnson and Malik Turner (Twitter link via Aaron Wilson of Pro Football Network). There’s no deal just yet, but both players could be considered for spots on SF’s 90-man offseason roster.

Turner, fresh off of a recent meeting with the rival Cardinals, first entered the league in 2018 as an undrafted free agent with the Seahawks. He saw time in 21 games for Seattle between 2018 and 2019, followed by 20 games with the Cowboys (2020 and 2021). He’s spent the bulk of his time on special teams, though he’s notched 29 receptions for 414 yards and four touchdowns over the course of his career.

It’s a similar story for Johnson, who has 51 catches, 839 receiving yards, and three touchdowns to his credit across five seasons with the Eagles, Colts, and Titans. Although his sample size is limited, Johnson has shown that he can be a real deep threat. He’s averaged 16.5 yards per catch as a pro, including 2020 when he posted 18.2 ypc for the Colts.

In other team news, longtime 49ers legend Frank Gore finally decided to call it a career on Sunday. Gore, 39 in May, leaves the game with exactly 16,000 regular season yards and a career 4.3 yards per carry average.

Marcus Johnson is done for the season. The Titans veteran wideout has been placed on injured reserve, reports Doug Kyed of Pro Football Focus (via Twitter). Since this is Johnson’s second IR stint of the season, he’ll have to sit out the rest of the 2021 campaign.

Johnson suffered a hamstring injury on Sunday that knocked him out for the majority of the contest. The receiver was a standout during training camp and preseason, but he landed on IR prior to the start of the season. He ended up returning in Week 5 and has played in each of the Titans last seven games (with three starts). In total, the 27-year-old has collected 158 yards from scrimmage on 11 touches.

In total, Johnson has seen time in 41 career games, hauling in 51 receptions for 839 yards and three touchdowns. Prior to his stint in Tennessee, he spent three seasons with the Colts.

With Julio Jones on IR, Johnson was expected to see a larger role in the offense, and he had a breakout game with an 100-yard outing in Week 10. A.J. Brown is also banged up, meaning the Titans passing attack could be led by the likes of Chester Rogers, Nick Westbrook-Ikhine, and Dez Fitzpatrick during this weekend’s showdown with the Patriots.

Johnson wasn’t the only Titans player to land on IR today. The team also cornerback Chris Jackson on injured reserve.