It sounds like veteran Jimmie Ward is going to miss part of the upcoming season. ESPN’s Nick Wagoner writes that the 49ers safety is likely to land on injured reserve to start the regular season, which would knock him out for the first four games. 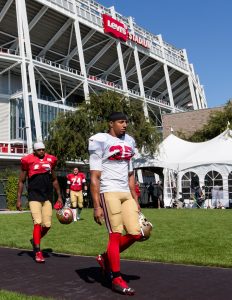 Ward originally suffered a hamstring injury back on August 14. The injury was described as “pretty bad,” and while the safety was expected to miss some time with the issue, it was uncertain if it’d extend into the regular season. It sounds like that’ll be the case, meaning Ward would miss at least one game for the sixth-consecutive season.

With that said, the 31-year-old has been healthier in recent years. After being limited to only 16 games between 2017 and 2018, Ward has missed only six contests over the past three years. He started a career-high 16 games this past season, finishing with 77 tackles, six passes defended, and two interceptions. Pro Football Focus ended up ranking him 16th among 92 qualifying safeties last season.

“He allows us to do what we do,” Lynch said (via Wagoner). “He’s a safety who plays like a safety but also covers like a corner. He’s often times our best cover man, so it’s a big loss. But we got to find a way to step up.”