Ageless running back Frank Gore has decided to call it a career. In an interview on TheSFNiners podcast (video link), Gore said that, within the next several months, he will sign a one-day contract with the 49ers and officially announce his retirement. 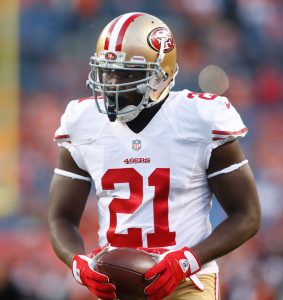 San Francisco selected Gore in the third round of the 2005 draft, and though he appeared in 14 games in his rookie campaign, he started just one, operating as part of an RB tandem with Kevan Barlow. Prior to the 2006 season, the Niners traded Barlow to the Jets, thereby clearing the way for Gore to take over as a full-time starter, a role he held for nine seasons in the Bay Area.

During that time, the Miami product established himself as one of the best, and most consistent, backs in the league. He racked up all five of his Pro Bowl nominations, and he averaged over 1,160 yards per season on a robust 4.5 yards-per-carry average. That stretch included eight seasons of 1,000+ yards, and the only year in which he did not hit that benchmark was 2010, when he appeared in just 11 games due to a hip injury.

Gore, who will turn 39 in May, was also an effective receiver out of the backfield, particularly in the early days of his career. From 2006-10, he averaged 51 catches and just over 430 receiving yards per season, which, when added to his rushing output, made him a true dual threat. The 2006 season was especially productive, as he generated 2,180 all-purpose yards and nine total TDs. Though he was never a prolific touchdown producer — just one season of 10 or more combined rushing and receiving scores — he did find paydirt an even 100 times in his regular season career (81 on the ground, 18 through the air, and one fumble recovery).

After Gore’s tremendous run with the 49ers — he is now the franchise’s all-team leading rusher by a wide margin — he began the second chapter of his career by signing a three-year, $12MM deal with the Colts in March 2015. He was still productive during his three years in Indianapolis, as he did not miss a game and averaged nearly 1,000 rushing yards per season to go along with 263 rushing yards per year, but he did not post a YPC rate above 3.9.

Despite all of his individual successes, Gore was not fortunate enough to play for many championship contenders. In 16 NFL seasons, he suited up for just four playoff outfits (the 49ers from 2011-13 and the Bills in 2019). He did get to participate in Super Bowl XLVII with San Francisco at the end of the 2012 season, but the Niners came out on the losing end of that contest. Gore at least held up his end of the bargain, rushing for 319 yards and four TDs on 63 carries in the team’s three-game postseason run.

In all, Gore rushed for exactly 16,000 yards in the regular season, which gives him a beautifully round 1,000 yards/season average and positions him behind only Emmitt Smith and Walter Payton on the all-time list. He supported that total with a 4.3 YPC mark, thereby demonstrating that his production was not driven just by his remarkable longevity.

Per Spotrac, Gore earned over $63MM in his playing career, and he indicated on the podcast that he hopes to move into a front office role. He said, “I told [49ers CEO] Jed York that I always wanted to be a Niner, so we’re working on [the one-day contract] right now, and then we’re going to also sit down with me and my agent to talk about me working in the front office. I love looking at talent, and I love evaluating talent, and I love ball.”

We here at PFR congratulate Gore on a terrific career — which may ultimately end with a Hall of Fame bust in Canton — and wish him all the best in his front office endeavors.

28 comments on “Frank Gore To Retire”