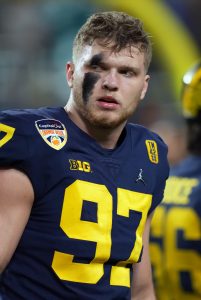 “My Michigan legacy is complete, and it was truly the best time of my life,” Hutchinson said (Twitter link). “Onward and upward to the 2022 NFL draft. Thank you for everything, Wolverine nation and beyond.”

Hutchinson tallied 62 tackles, 14 sacks, 16.5 tackles for loss, three pass deflections, and one fumble recovery in his final year on campus. His performance earned him consensus All-American honors and the Lombardi Award, positioning him as the best lineman in college football. He also placed as the runner-up in Heisman voting, a rare feat for defenders.

The 6’6″, 265-pound edge rusher is firmly in the mix for the No. 1 overall pick, along with the likes of Oregon defensive end Kayvon Thibodeaux and Alabama tackle Evan Neal. The selection, of course, will be owned by either the Jaguars or Lions, depending on how Week 18 shakes out.