A two-year starter for the Patriots and a nine-year NFL veteran, John Simon saw another team hand him walking papers Monday. A few months after the Titans cut the veteran edge defender, the Steelers did the same. 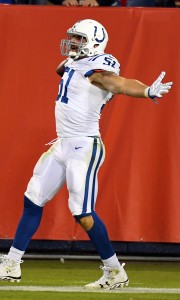 Pittsburgh had signed Simon to a reserve/futures deal in late January, after he played in one game with the team last season. The Steelers have questions behind their T.J. Watt–Alex Highsmith starting outside linebacker duo, but for the time being, younger players are positioned to answer them.

Simon, 31, has started 52 career games, played for six teams — the Ravens, Texans, Colts, Patriots, Titans and Steelers — and won a Super Bowl as a role player with the 2018 Pats. After the Colts bailed on Simon’s three-year, $14MM deal in 2018, the former Ravens fourth-rounder began that season unemployed. But he caught on with the Pats and became a full-time contributor by 2019. From 2019-20, Simon started 28 games with New England. The Titans signed the Ohio State product just ahead of training camp last year. He will look to catch on with yet another team before this year’s training camps open.

The Steelers have Genard Avery and ex-Broncos seventh-rounder Derrek Tuszka as potential backup edge options, and the team drafted Mark Robinson in the seventh round out of Ole Miss. It would still make sense if Pittsburgh looked into other edges this offseason, should its lower-profile lot of backups not impress.

Pittsburgh also waived wideout Rico Bussey and kicker Sam Sloman and waived rookie cornerback Bryce Watts with an injury designation. Sloman kicked in eight games for the Rams and Titans in 2020 but did not see action last year.

The Steelers have added a veteran to their offseason roster. The team announced that they’ve inked linebaker John Simon to a reserve/futures contract.

Simon was a fourth-round pick by the Ravens back in 2013, and he’s had stints with six different organizations throughout his career. This included 2019 and 2020 campaigns with the Patriots where he started 30 games, 114 tackles, and eight sacks.

Simon joined the Titans way back in July, replacing fellow pass rusher Tuzar Skipper on the offseason roster. He ended up getting into two games with Tennessee before earning his walking papers. He later caught on with the Steelers practice squad, earning a promotion for one game.

In total, the 31-year-old has 283 tackles and 21 sacks in 100 games (52 starts). There’s a good chance the veteran will stick around through at least training camp.

Julio Jones is on his way back. To help make room for him — as well as wide receiver Racey McMath and safety Dane Cruikshank — the Titans have released linebacker John Simon.

Simon joined the Titans in July, replacing fellow pass rusher Tuzar Skipper on the offseason roster. Before that, he spent three years with the Patriots. In 2020, he started in all 16 games and registered 53 stops with two sacks. This year, he’s been on-and-off of the Titans’ roster, resulting in two appearances with four total tackles.

All in all, he’s got 99 appearances and 52 career starts to his credit for the Ravens, Texans, Colts, Patriots, and Titans. Now, he could be en route to yet another NFL club, though the Titans have made a habit of bringing him back to Nashville.

The Titans dropped their last two games before the bye, but they’re still 8-4 and atop the AFC South. On Sunday, they’ll look to get back in the win column when they host the Jaguars.

The Titans have signed outside linebacker John Simon and defensive tackle Caraun Reid to the practice squad. Both veterans are now one injury away from making their 2021 debuts.

Simon first joined the Titans in July, replacing fellow pass rusher Tuzar Skipper on the offseason roster. Before that, he spent three years with the Patriots. In 2020, he started in all 16 games and registered 53 stops with two sacks. All in all, he’s got 97 appearances and 52 career starts to his credit for the Ravens, Texans, Colts, and Patriots.

Reid, meanwhile, has played for seven NFL teams since coming into the league in 2014. The veteran now has a chance to accomplish a rare NFL feat — should he make the Titans, he’ll have played for six teams in the past six years. The 29-year-old (30 in November) bounced on and off the Jaguars’ active roster in 2020. He saw time in seven games with Jacksonville last season — all as a reserve. Overall, the Princeton alum has 54 appearances to his credit, including 16 starts.