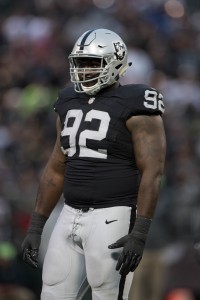 McGee has not played this season but was a key interior defender with the Raiders and Redskins. The six-year veteran worked out for the Bears and Jaguars recently but did not sign with either team. He will get a chance to join a Carolina rotation decimated by injuries.

The Panthers entered the season with perhaps the highest-profile group of interior linemen in the game, with Gerald McCoy joining Poe and Kawann Short. Injuries to the latter two have left McCoy alone for the Panthers’ stretch run. Short has been on IR for several weeks, and Poe’s torn quad will sideline him for the rest of the season.

A 2013 sixth-round Raiders selection, McGee signed a five-year, $25MM deal with Washington in 2017. After a 10-start 2017 season, McGee underwent late-offseason thigh surgery. That limited him to 10 games in 2018. The Redskins cut the 29-year-old D-lineman in March, but he will have a chance to make a case for 2020 NFL employment over the final five games of this season.

The Redskins are releasing defensive lineman Stacy McGee, a source tells Mike Garafolo of NFL.com (on Twitter). The Redskins tried to shop McGee on the trade block, but were unable to find a suitable deal.

McGee joined the Redskins on a five-year, $25MM contract prior to the 2017 season and appeared in all 16 games (ten starts) for the club in his first year, managing 44 tackles in the process. In 2018, however, he was held back by a June thigh surgery. Playing hurt and in a reserve role, McGee had just nine tackles and one sack in his eight games. Ultimately, McGee was overshadowed by a D-Line that also included Jonathan Allen, Da’Ron Payne, Matt Ioannidis, Tim Settle, and Caleb Brantley.

McGee will now have the opportunity to shop himself to other interested clubs, though he’ll probably fall short of his previous $5MM/year AAV.

McGee joined the Redskins on a five-year, $25MM contract last spring and appeared in all 16 games (ten starts) for the club in 2017, managing 44 tackles in the process. This year, he was held back by thigh surgery in June. Joining a defensive line that also includes Jonathan Allen, Da’Ron Payne, Matt Ioannidis, Tim Settle, and Caleb Brantley, McGee is unlikely to start, but he could find a spot in the rotation.

Ladler was no longer needed after the Redskins acquired standout safety Ha Ha Clinton-Dix from the Packers before the trade deadline. The 26-year-old dressed for five games this year and played primarily on special teams.

Redskins defensive lineman Stacy McGee and Lions wide receiver Andy Jones, both of whom are currently on the physically unable to perform list, returned to practice on Wednesday, according to veteran NFL reporter Howard Balzer (Twitter link).

NFL players on the physically unable to perform (PUP) list must miss at least the first six weeks of the regular season, so McGee and Jones have already fulfilled that requirement. Now that they’ve returned to practice, Washington and Detroit both have a three-week window during which it can decide to either activate McGee and Jones to its respective 53-man rosters, or keep them on the PUP list for the rest of 2018 campaign.

McGee joined the Redskins on a five-year, $25MM contract last spring and appeared in all 16 games (10 starts) for the club in 2017, managing 44 tackles in the process. He underwent surgery on his thigh in June, and had been fully expected to miss time as he recovers. When he does see the field, McGee will join a Washington defensive line depth chart that also includes Jonathan Allen, Da’Ron Payne, Matt Ioannidis, Tim Settle, and Caleb Brantley.

Jones, 24, went undrafted out of Jacksonville University in 2016, and originally latched on with the Cowboys. He spent the entirety of his rookie season on Dallas’ practice squad before being cut in advance of the 2017 season. He was claimed off waivers by the Texans, but appeared in just one game before being waived yet again. Jones was on the Lions’ practice squad from September onward, until getting promoted to the active roster for three games in December.