The Buccaneers have signed center Josh LeRibeus, according to a team announcement. LeRibeus, a former third-round pick of the Redskins, most recently played for the Saints. 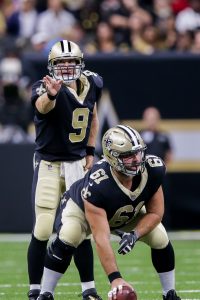 LeRibeus was one of five veteran players who took part in the Buccaneers’ minicamp in early June on a tryout deal. The SMU product profiles as a depth option for the Bucs and offers some experience in the way of 28 career appearances with 12 starts.

In 2015, LeRibeus was the starting center for the Redskins and helped them place 10th in scoring. He also made three starts at left guard for the Saints last year, but the Bucs probably plan to use him in the middle after referring to him as a center in their press release.

With LeRibeus in the fold, the Bucs are back to the 90-man roster max. Last week, they dropped down to 89 players with the release of running back Shaun Wilson.

The Saints could make a high- or low-profile IR-return move in the coming days. Both Ted Ginn and offensive lineman Josh LeRibeus remain candidates to return from IR this season, Sean Payton said.

“Rehab is going well. It’s still an option,” Payton said of a return from one of these players (via Fox 8 Live). “Both he (Ginn) and LeRibeus, I would say are on schedule. … I’m encouraged by how both of those guys are doing.”

Only one of these players can return this season. The Saints used one of their IR-boomerang slots on wideout/specialist Tommylee Lewis.

This decision presumably hinges on how Ginn’s recovery looks, with the starting wide receiver a once-integral part of New Orleans’ aerial attack. Ginn underwent surgery in October and is eligible to return from IR this week. But with the 33-year-old deep threat having yet to practice since the IR designation, it’s unlikely he’d be ready to go for Week 15 against the Panthers — even if the Saints use the IR-return spot on him this week.

LeRibeus filled in as a spot starter up front in three games this season. He played in 16 Saints games in 2017. The 29-year-old lineman also is recovering from an ankle injury and would seemingly be the backup plan in case Ginn cannot come back.

Despite Josh LeRibeus failing to make the Saints’ roster out of training camp, he re-signed with the team shortly after and made three starts. But the veteran offensive lineman’s season could well be over.

A LeRibeus ankle injury prompted the Saints to make this move. LeRibeus suffered the malady against the Ravens, a game he started at left guard in place of Andrus Peat. Playing in his second season with the Saints, LeRibeus started in Peat’s place in Week 1 and Week 3 as well.

The Saints could bring LeRibeus off IR in Week 16, but with just two IR-return options available to them, that’s obviously uncertain. New Orleans still has four other backup offensive linemen on its active roster.

Green started six games for the Cowboys between the 2016 and ’17 seasons, his most noteworthy outing coming in a game in which he started for Tyron Smith at left tackle and Adrian Clayborn hounded him in a six-sack performance. The 26-year-old Green was a third-round Cowboys pick in 2015.

Josh LeRibeus played in 16 games for the Saints last season and will attempt to carve out a spot on New Orleans’ 53-man roster for a second straight year.

The defending NFC South champions re-signed the free agent offensive lineman on Friday, Field Yates of ESPN.com tweets. LeRibeus signed a one-year deal with the Saints last year as well. He reached an agreement to return to New Orleans after working out for the 49ers earlier this month.

A former third-round Redskins pick in 2012, LeRibeus has mostly served as a depth component in his career. His lone season with consistent first-string opportunities came in 2015 for the Redskins. The 29-year-old blocker saw action in 217 snaps in 2017, profiling as a better pass-blocking lineman than helping create run lanes.

The Saints lost Senio Kelemete to the Texans in free agency but reacquired Jermon Bushrod and will have Andrus Peat back healthy. New Orleans also used fourth- and seventh-round picks on linemen, so it’s not a given LeRibeus will make the team again.