The Saints have completed their busy evening by adding some offensive line help. Nick Underhill of The New Orleans Advocate reports (via Twitter) that the team has signed veteran lineman Don Barclay. 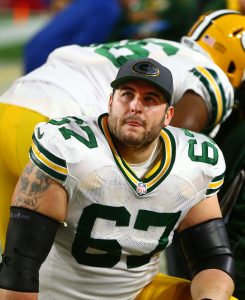 The 2012 undrafted free agent out of West Virgina has managed to put together a six-year career, most of which came with the Packers. Besides missing the entire 2014 campaign, the 305-pound offensive guard sat out only a pair of regular season games during his Green Bay tenure, and he made 24 starts protecting Aaron Rodgers. Barclay has also appeared in eight career postseason games.

He was released with an injury settlement in October and quickly caught on with the Lions. However, after appearing in three games (one start) with his new team, Barclay suffered a season-ending concussion.

The 29-year-old will now try to crack a Saints rotation that’s seeking a top reserve. Jermon Bushrod and Cameron Tom appear to have the inside track on that “sixth man” role (via John Sigler of USA Today), although Barclay could certainly provide the duo with some competition. The Saints are also rostering Rick Leonard, Josh LeRibeus, and Bryce Harris.

Earlier tonight, the Saints added a pair of wide receivers in Michael Floyd and Brandon Tate.

While initial reports indicated Lions wideout Golden Tate would be sidelined for a “few weeks” after suffering an AC joint sprain in Week 6, the veteran pass-catcher participated in practice today, reports Dave Birkett of the Detroit Free Press (Twitter link). Tate’s presence at practice certainly doesn’t mean that he’ll be ready to face the Steelers on Sunday, and there’s every reason that he’ll remain doubtful for Week 8 (especially given that he was recently spotted sporting a sling). But it’s a remarkable turnaround for Tate, and gives him a decent chance at being available in Week 9 even if he can’t go against Pittsburgh.