Chargers’ Matt Slauson Out For Season

The Chargers already lost one starting offensive lineman when rookie Forrest Lamp suffered a torn ACL before the season even started, now they can add another name to that list. According to the Chargers official Twitter account, offensive lineman Matt Slauson will miss the remainder of the season with a biceps injury. The tweet was a direct quote from head coach Anthony Lynn, confirming the news. 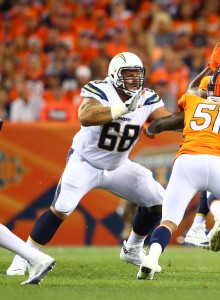 Slauson, 31, started at left guard in each of the Chargers first seven games. The veteran lineman originally signed with the team after the 2015-16 season for two years, $4 MM. Slauson was the starter at center last year before shifting over to guard for the 2017-18 season.

The news is a bit of downer for the Chargers considering that the team has won three games in a row after an 0-4 start. Los Angeles will now have to turn to rookie third round pick Dan Feeney to start in place of the nine-year veteran. The Chargers team may also decide to add another offensive lineman to the active roster with now only three backup lineman on the depth chart.

2 comments on “Chargers’ Matt Slauson Out For Season”