Jaelen Strong‘s Browns tenure looks like it will be limited to one offseason. The wideout tweeted a farewell message to Cleveland, and the Cleveland Plain Dealer’s Mary Kay Cabot confirmed (via Twitter) the former third-round pick will be cut.

Despite the Browns losing Breshad Perriman in free agency, they have a deep receiver corps. Odell Beckham Jr., Jarvis Landry, Antonio Callaway and Rashard Higgins headline the group. Cleveland, though, will be shorthanded — from a depth standpoint — in September. A suspension will cost Callaway four games.

Strong has not played in a regular-season game since 2017. He tore an ACL in December of 2017, but he’d caught just three passes leading up to that. The former Arizona State standout caught 14 passes in each of his first two seasons, with the Texans, before being cut in September of 2017.

The Browns have signed wide receiver Jaelen Strong, according to a team announcement. Strong, a former third-round pick, did not play in the 2018 season. 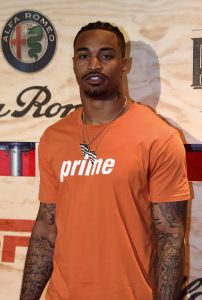 Strong spent his first two seasons in the NFL with the Texans, but was released by Houston in September of 2017 and landed with the Jaguars as a depth signing. He was activated in the wake of injuries to starters Marqise Lee and Allen Hurns and responded by catching a touchdown pass in the first half. Unfortunately, he went down with a season-ending ACL tear in his left knee in that game. In April of 2018, the Jaguars cut him loose.

If Strong has fully recovered, he could be an intriguing weapon for quarterback Baker Mayfield. The Browns could use some fortification in their receiver group anyway – Jarvis Landry led the way with 81 catches last year, but no other Browns receiver topped 45 grabs.

The Jaguars have released wide receiver Jaelen Strong. It’s an unfortunate development for the 24-year-old as he recovers from a torn ACL.

Strong spent his first two seasons in the NFL with the Texans, who selected him in the third round of the 2015 draft. He was cut by Houston in September and landed with the Jaguars as a depth signing. He was activated for the first time in December in the wake of injuries to starters Marqise Lee and Allen Hurns and responded by catching a touchdown pass in the first half. Unfortunately, he went down with a season-ending ACL tear in his left knee in the game.

Strong is still rehabbing from surgery, but he figures to be a popular target for teams once he’s able to get back on the practice field.

An encouraging comeback game turns out to be the final one of the 2017 season for wide receiver Jaelen Strong. After catching his first touchdown pass of the season against the 49ers, the 23-year-old wideout revealed on his own personal Instagram that he has torn his ACL, effectively ending his third professional season. 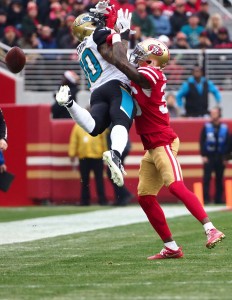 “I was cut in September by the Texans. Jags claimed me a day after. 14 weeks later I am finally active. My first reception goes for a TD. IM SO EXCITED to finally be out here w GANG grinding w my dogs and then I tear my ACL. I walked off on my own power cause i immediately thought of who was watching me, our youth! Let this be a testimony for you. No matter what knocks you down you gotta pull ya self back up and what better way to show you then this… can’t wait to watch my dogs in the OFFS! Love everybody who been in my corner.”

Strong had spent his first two seasons in the NFL with the Texans, who had selected him in the third round of the 2015 NFL Draft. Strong was cut by Houston in September, but was signed by the Jaguars after the team needed wide receiver depth. Strong was activated for the first time this season as Jacksonville dealt with injuries to starters Marqise Lee and Allen Hurns.

Strong responded by catching three balls and a game tying touchdown at the end of the first half. It’s a cruel turn of events for what was looking to be a nice turn around story. Now the Jaguars will have to hope for the likes of Lee and Hurns to return for the postseason. Rookies Keelan Cole, Dede Westbrook and Jaydon Mickens have stepped up admirably for quarterback Blake Bortles over the past few weeks, but Jacksonville would certainly like their more veteran playmakers to get back in the lineup with the playoffs just two weeks away.

Jaelen Strong is back. The Jaguars have promoted the wideout to the active roster, reports John Oehser of Jaguars.com (via Twitter). To make room on the roster, the team has waived/injured receiver Larry Pinkard. 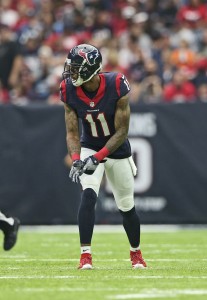 The 23-year-old has only appeared in a single game this season without compiling a catch. During his first two years in the league, Strong hauled in 28 catches for 292 yards and three touchdowns in 18 games (three starts). He’ll presumably slide behind Keelan Cole and Jaydon Mickens at the bottom of the receiver depth chart.

Pinkard had been recovering from a concussion in recent weeks. The former undrafted free agent out of Old Dominion was promoted to the Jagaurs active roster in mid-November. He ultimately played in four games, compiling a single five-yard catch. 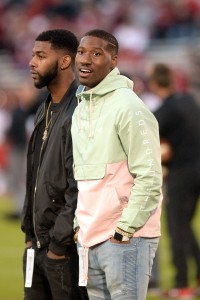 The Jaguars have claimed wide receiver Jaelen Strong off waivers from the Texans, according to ESPN.com’s Adam Schefter (Twitter link). Strong was released by Houston on Monday.

Because he is not yet a vested veteran, Strong was subject to the waiver wire. With one of the league’s worst records last year, the Jaguars had higher waiver priority than most.

Jacksonville is hoping that Strong will flash some of the skills that made him a third round pick in 2015 draft. So far, he hasn’t done much in the NFL. In his final game as a member of the Texans, he drew zero targets despite the team being paper thin at receiver.

But, at Arizona State, he had 82 catches for 1,165 yards and ten touchdowns in his final season on campus. He’s a 6’3″ target with the strength to push away defenders, so he can make plays happen even though he doesn’t have tremendous speed.

Strong will provide depth for a WR group that is without Allen Robinson for the remainder of the year and without rookie Dede Westbrook for at least six more games.