The Browns will have a new wideout in uniform for Sunday’s game against the Bills. Mary Kay Cabot of Cleveland.com reports (via Twitter) that the team has promoted receiver Mario Alford from their practice squad. 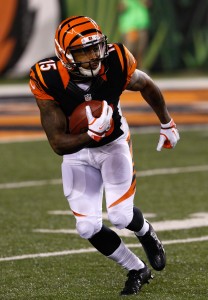 Alford, a seventh-round pick in the 2015 draft, spent his rookie season with the Bengals, where he hauled in one 15-yard reception in one game. The West Virginia product was cut by the team following the 2016 preseason, and he briefly caught on with the Jets practice squad. The 24-year-old was released by the organization in early December, and he caught on with the Browns a week later.

It’d be a stretch to expect the 5-foot-8, 177-pound wideout to make a significant impact on the Browns passing game. Of course, the Browns could use all the help they could get. Despite Terrelle Pryor‘s breakout campaign, Cleveland’s passing game still ranks towards the bottom of the league in nearly every passing/receiving category. Five different quarterbacks (excluding Pryor) certainly hasn’t boosted the passing game, nor did the loss of Josh Gordon and Jordan Payton to suspension.