The Browns have several options to choose from as they select their starting quarterback — they did not promise a starting job to Robert Griffin III, third-round rookie Cody Kessler is expected to be given an opportunity to compete, and even Josh McCown is still a threat to earn the starting role. And though head coach Hue Jackson says Cleveland will choose a starter “way before” the season begins, the club doesn’t feel the need to rush when naming its No. 1 signal-caller.

“It’s too soon,” Jackson told Mary Kay Cabot of Cleveland.com. “We haven’t gotten into OTAs yet. We just have had offseason and voluntary veteran minicamp and now we’ve got the rookies in and I think that’s way too soon. I would never do that. Again, every position is earned. There’s always competition and there’s a reason behind it.

“At some point in time, I’m sure with [GM] Sashi [Brown] and myself, we’ll make a decision on which direction to go, and it will be the right time. Timing is everything and we’ll get there when we need to.”

Here’s the latest look around the NFL…

3:24pm: The deal is now official, per John Oehser of Jaguars.com (Twitter link).

2:59pm: The Jaguars have added some depth to their offensive line, according to Mike Garafolo of FOX Sports, who reports (via Twitter) that the team has agreed to terms with offensive lineman Mackenzy Bernadeau. It’ll be a two-year deal worth up to $4MM, says Garafolo. 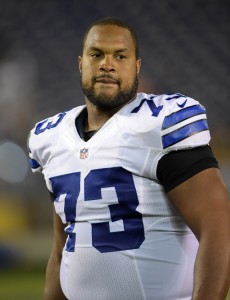 Bernadeau, 30, started his career with the Panthers back in 2008 before joining the Cowboys in 2011. The former seventh-round pick was Dallas’ primary starter at right guard in 2012 and 2013, but returned to a reserve role in 2014 after the Cowboys drafted Zack Martin. Bernadeau will be the second reserve Cowboys lineman to join the Jaguars in free agency in the last two years — Jacksonville signed Jermey Parnell to a long-term deal last March.

While the Jaguars have a starting spot on their offensive line open after releasing Zane Beadles, Bernadeau is likely more of a depth piece. He may get a chance to compete for playing time with the team’s current in-house options, as well as whoever else joins the franchise in free agency or the draft.

Currently, A.J. Cann, Brandon Linder, and Luke Bowanko appear to be the top contenders to be in the mix for the two guard spots, along with Bernadeau. With veteran center Stefen Wisniewski also facing free agency, the team will need someone to fill that position as well, though it’s still possible Wisniewski will re-sign.

Cowboys guard Ronald Leary will not be suspended for his 2012 DWI arrest, reports ESPN’s Calvin Watkins.

According to court documents, Leary was arrested days after the team’s 2012 season opener at the New York Giants, but it’s taken nearly two years for him to face trial (scheduled for July 14, per the Dallas Morning News). In terms of discipline from the NFL, Watkins explains, “When an NFL player is charged with a DWI offense, he’s placed into the league’s substance abuse program. Once that player completes the program, the league considers the legal matter over based on the facts of any particular case.”

Leary, 25, went undrafted out of Memphis in 2012, in part because of a knee issue that scared teams off. However, he was considered a mid-round prospect with eventual starter potential, and the Cowboys secured his services with an enticing offer. After spending 2012 on the practice squad, Leary started all 16 games at left guard last season. He struggled, though, failing to establish himself as a long-term answer, and with rookie first-rounder Zack Martin expected to take over right guard, Leary will compete with Mackenzy Bernadeau for the left guard spot.