The Buccaneers have placed strong safety Chris Conte on injured reserve. Conte was forced to exit Monday night’s game against the Steelers with a knee injury, and it wound up being a serious issue.

Conte has been a starter for the bulk of his career and has been a fixture in the Bucs’ secondary for the last four seasons. Last year, he played in all 16 games last year, starting 14. He didn’t set the world on fire as he was ranked No. 57 at his position by PFF, but the Bucs saw him as a serviceable player and brought him back on a low-cost $2.375MM option.

Conte was posterized by Steelers tight end Vance McDonald on Monday night, but the brutal stiff arm proved to be the least of his problems. Meanwhile, the Bucs will have to draw from a reserve safety group that includes fourth-round rookie Jordan Whitehead and former UDFA Isaiah Johnson.

Bucs To Meet With J.J. Wilcox 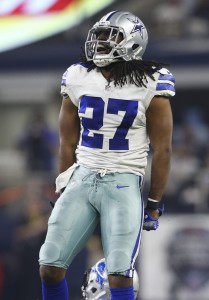 Safety is a definite need area for the Buccaneers. Chris Conte has been re-signed, but Bradley McDougald is a pending free agent. Keith Tandy figures to take at least one of Tampa Bay’s starting safety jobs after playing well down the stretch in 2016, but the club could use another defensive back. Wilcox ranks 12th on PFR’s list of free agent safeties.

“[I’m] Excited to be a part of what we’ve got building,” Conte told Auman.

Last year, Conte re-upped with the Bucs on a one-year, $3MM deal, his second consecutive one-year pact. This time around, he’ll get to take his coat off and stay a while.

In 2016, Conte had 64 total tackles and two interceptions. The advanced metrics weren’t crazy about him, however. He ranked as the No. 88 safety out of 89 qualified players, per Pro Football Focus. His career-low 42.0 overall score was weighed down by dreadful marks for run defense and by only slightly less dreadful marks for coverage and pass rush. In his previous two years with Tampa, he earned scores of 64.6 and 75.3.

Despite Conte’s re-signing, the Buccaneers are likely still in the market for safety help. Keith Tandy is projected to start at one spot after playing well down the stretch in 2016, but Tampa Bay needs to acquire another solid defensive back. They’ve been linked to free agent J.J. Wilcox, who reportedly has mutual interest in coming to town.

The Buccaneers have agreed to re-sign safety Chris Conte, according to Gil Arcia of TheBayCave.com (Twitter link). Jenna Laine of Sports Talk 1040 and Roy Cummings of the Tampa Tribune (Twitter links) have since confirmed the deal. It’ll be a one-year pact, per Greg Auman of the Tampa Bay Times (Twitter link).

Andre Smith is expected to visit the Vikings on Sunday, Darren Wolfson of KSTP tweets. The 38th-ranked player in PFR’s top 50 free agents list, Smith’s market has been slower to materialize than Mitchell Schwartz, the other top right tackle in this year’s class. The veteran right-edge player rated as Pro Football Focus’ No. 58 tackle last season and doesn’t have much left tackle experience.

The Vikings restructured the recently injury-prone Phil Loadholt‘s contract earlier this week, seemingly clearing up some of their uncertainty up front. But Loadholt’s sustained two season-ending injuries over the past two seasons and has just one year left on his contract, so it makes sense that Minnesota would have interest in adding some insurance.

Here’s more on free agents from around the NFC:

The Buccaneers will meet with the agent for upcoming free agent safety Chris Conte at the scouting combine this week, according to Scott Reynolds of Pewter Report. Conte will hit free agency on March 9 if no deal is reached.

Like Conte, many of Tampa Bay’s free agents play on the defensive side of the ball, as corner Sterling Moore, as well as defensive tackles Henry Melton and Tony McDaniel, are also projected to reach free agency. The club’s most high-profile free agent-to-be, however, is running back Doug Martin, who is said to be discussing a new deal with the Buccaneers.

Tampa Bay general manager Jason Licht said earlier this month that his team was wary of spending big in free agency. So perhaps re-signing a competent player like Conte — who is unlikely to cost all that much — would be one way for the Buccaneers to reduce their need to enter the free agent market.