The Colts re-signed tackle J’Marcus Webb, according to a club announcement. Details on the deal are not yet known.

Webb hooked on with the Colts in July of last year after a rash of injuries decimated their offensive line. Webb wound up as the club’s Week 1 starter, but a hamstring injury suffered in that game brought his season to an early end.

Despite injuries to Webb, Denzelle Good, Anthony Castonzo, and others, the Colts’ offensive line turned in a brilliant season. The Colts allowed just 18 sacks in 2018, the fewest in the league. They also had an impressive streak of allowing zero sacks on Andrew Luck 239 consecutive snaps, spanning across five games.

Webb, 31 in August, has 65 career starts to his credit between stops with the Bears, Vikings, Raiders, Seahawks, and Colts.

J’Marcus Webb picked up a start for his fifth team on Sunday, but the veteran offensive lineman won’t have a chance to suit up again for a while. He may miss the rest of the season.

The Colts placed Webb on IR on Tuesday and promoted cornerback Lenzy Pipkins, a recent trade acquisition, from their practice squad, the team announced.

Webb started in place of Denzelle Good at right tackle and suffered a hamstring injury late in the fourth quarter of Indianapolis’ Week 1 loss. The Colts were already without their top tackle, left-side starter Anthony Castonzo, but are expected to have him ready for Week 2. Good sat Sunday because of wrist and knee injuries.

Indianapolis signed Webb to a one-year deal worth the league minimum in late July. The 30-year-old blocker’s now started for the Bears, Vikings, Raiders, Seahawks and Colts. He may not profile as an IR-return candidate, given the other injuries that could affect more essential players’ statuses early in the season.

Pipkins came to Indiana via trade, with the Packers shipping the defensive back in exchange for linebacker Antonio Morrison last month. The Colts waived Pipkins, a 2017 UDFA, after training camp but stashed him on their practice squad.

Webb, 29, signed a two-year deal worth $6.25MM with the Seahawks prior to the 2016 campaign, a pact that contained nearly $2.5MM in guarantees. Slated to serve as Seattle’s right tackle, Webb made only three starts — and appeared in just eight total games — before being waived in November of ’16. In that half of a season, he earned a substantially below-average grade of 38.2 from Pro Football Focus. He has not seen the field since then.

Webb’s stop in Seattle wasn’t much to write home about, but he does offer 46 games of NFL experience, including 44 starts. With the Colts, he’ll work to become a reserve behind starting tackles Anthony Castonzo and Austin Howard.

Free agent offensive tackle J’Marcus Webb has been suspended for the first four games of the 2017 season, a source tells Field Yates of ESPN.com (Twitter link). There’s no word as to the cause of the ban.

Webb, 28, signed a two-year deal worth $6.25MM with the Seahawks prior to the 2016 campaign, a pact that contained nearly $2.5MM in guarantees. Slated to serve as Seattle’s right tackle, Webb made only three starts — and appeared in just eight total games — before being waived in November. His release wasn’t unwarranted, as Webb had earned a substantially below-average grade of 38.2 from Pro Football Focus.

Though he does offer positional flexibility, Webb didn’t garner much interest after being cut loose by the Seahawks. The 49ers were the only club to take a look at Webb, bringing him in for a workout in December.

Things didn’t work out between J’Marcus Webb and the Seahawks. Could the offensive tackle try and redeem himself with an NFC West rival? The 49ers worked out Webb on Monday, according to Eric Branch of the San Francisco Chronicle.

Webb joined the Seahawks this past offseason on a two-year, $6.25MM ($2.5MM guaranteed) deal. The former seventh-round pick was expected to compete for a starting gig, and the 28-year-old did end up starting three games for Seattle. However, the veteran’s role diminished over time and he was released in November.

In his 223 snaps for Seattle, Webb was given a dreadful 38.2 overall grade from Pro Football Focus. Still, Webb offers plenty of starting experience, as the veteran has had three seasons with 16 starts. In six-plus seasons, Webb has played 80 games between the Seahawks, Raiders, Vikings, and Bears. He also has some experience playing on the interior line.

The 49ers could use some O-Line help considering that left tackle Joe Staley (hamstring) has missed the past couple of games, center Daniel Kilgore was placed on IR, and Kilgore’s replacement Marcus Martin suffered an ankle injury on Sunday.

The Seahawks have waived offensive tackle J’Marcus Webb, reports ESPN’s Adam Caplan (via Twitter). No corresponding move has been announced, although Bob Condotta of The Seattle Times believes the team will be adding a running back.

Webb joined the Seahawks this past offseason on a two-year, $6.25MM ($2.5MM guaranteed) deal. The former seventh-round pick was expected to compete for a starting gig, and the 28-year-old did end up starting three games for Seattle. However, the veteran’s role has diminished over the past few weeks, and with rookie Germain Ifedi fully healthy, the team decided to move on from their offseason addition. The Seahawks will presumably be rolling with George Fant, Joey Hunt, and Rees Odhiambo as their backup offensive lineman.

The versatile lineman does have plenty of starting experience, as the veteran has had three seasons with 16 starts. In six-plus seasons, Webb has played 80 games between the Seahawks, Raiders, Vikings, and Bears.

Former NBA point guard Nate Robinson didn’t earn a roster spot after trying out for the Seahawks earlier this month, but he hasn’t given up on making an NFL squad at some point, according to Sheil Kapadia of ESPN.com. Robinson is now working out with former NFL receiver Dwayne Frampton as he continues to chase his dream. “It’s as hard as you could possibly get,” Seattle head coach Pete Carroll said of Robinson’s attempt. “He’s 32 as well. I don’t know if anybody could do it. But if anybody could, it might be Nate. He’s that versatile an athlete and that great a competitor.” Robinson is trying to make it in the NFL as a defensive back.

Here’s more out of the NFL’s two West divisions:

Despite being selected at No. 13 overall, Laremy Tunsil is slotted at a foreign position to him. The Dolphins are currently planning to station the Ole Miss left tackle at left guard, Barry Jackson of the Miami Herald reports.

A three-year starter with the Rebels exclusively at left tackle, Tunsil told media (including Jackson) he has never played guard but expressed willingness to line up anywhere on the Fins’ front. Branden Albert and Ja’Wuan James remain as the Dolphins’ tackles, leaving Tunsil to join Billy Turner on Miami’s first unit at guard. With Albert, James and Mike Pouncey in the fold, guard has been a troublesome spot for the Dolphins recently.

Pro Football Focus graded the Dolphins as the league’s No. 31 line, ahead of only the injury-ravaged Chargers, with former starting guard Dallas Thomas receiving the site’s worst marks among its starters. PFF graded Miami as the league’s worst run-blocking line last season.

Here’s more on Tunsil and the latest from the respective offensive fronts around the league.

6:07pm: The Seahawks officially announced the signing, as Bob Condotta of The Seattle Times tweets.

2:38pm: Webb’s deal with the Seahawks will be a two-year pact worth $6.25MM, featuring $2.5MM in guarantees, per Ian Rapoport of NFL.com (via Twitter).

8:50am: The Seahawks have agreed to terms on a contract with offensive lineman J’Marcus Webb, reports Mike Garafolo of FOX Sports (Twitter link). Terms of the agreement aren’t yet known. 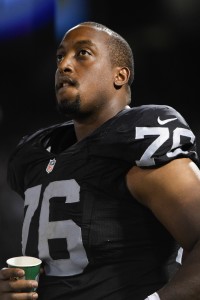 Webb, 27, started his career as a Bear after being selected in the seventh round of the 2010 draft. After earning 44 regular-season starts in three seasons for Chicago, the veteran lineman joined the Vikings as a backup for two years, then spent 2015 in Oakland.

Webb turned out to be a valuable piece for the Raiders last season, spending time at both right guard and right tackle. He was one of the few players in the NFL to appear in 100% of his team’s offensive snaps, so Oakland will have a hole to fill on its offensive line in 2016 — the team, of course, has brought in free agent signee Kelechi Osemele, though Osemele seems likely to play on the left side rather than the right.

In Seattle, meanwhile, Webb looks like a good bet to compete for the starting job at right guard. Russell Okung is a free agent at left tackle, and Garry Gilliam has just one year of starting experience at right tackle, so there are other scenarios the Seahawks could explore, but Webb saw most of his playing time in 2015 at right guard.