Nate Robinson Trying Out For Seahawks

3:52pm: The Seahawks aren’t signing Robinson today, but they’ll keep his number handy for down the road, Ian Rapoport of NFL.com tweets.

2:35pm: It appears that former NBA player Nate Robinson is making a run at playing in the NFL. The diminutive point guard is now packaging himself as a defensive back as he tries out for the Seahawks today, sources tell Master Tesfatsion and Mark Maske of The Washington Post.

Robinson originally went to the University of Washington 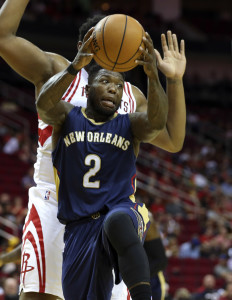 on a football scholarship and made a name for himself on the gridiron with his electrifying plays, but it has been many years since he tried his hand at football. In a YouTube video released in March, the 32-year-old first announced his NFL aspirations and spoke about playing both offense and defense. However, the early word is that Robinson is looking to play on defense.

Strangely, Robinson signed a deal with an Israeli basketball team just days after saying that he would pursue football. As teams tinker with 90-man rosters, however, Robinson is shifting his focus back to the gridiron once again. It would make for a great story if Robinson is able to land a deal from the Seahawks, particularly since he is a Seattle native.

3 comments on “Nate Robinson Trying Out For Seahawks”