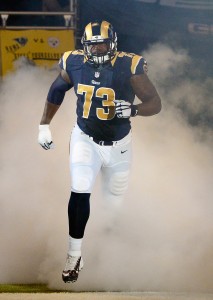 Both Robinson and Kouandjio will compete to start at left tackle for the Lions, head coach Jim Caldwell announced. The position became a concern for the Lions when stalwart Taylor Decker suffered a torn labrum during organized team activities, thereby creating an obvious need opposite big-money right tackle Ricky Wagner.

Like Decker, a first-round pick last year, both Robinson and Kouandjio were high selections in recent drafts. However, neither has established himself as a quality NFLer. Robinson disappointed in St. Louis and Los Angeles after going second overall in the 2014 draft, which led the Rams to decline his fifth-year option for 2018 before dealing him. Robinson does come with plenty of experience, having started in 42 of 46 appearances (including all 14 in 2016), though Pro Football Focus ranked him among the league’s worst tackles in each of his first three seasons. He’s due a $3.3MM salary as he enters the final year of his contract.

Kouandjio was in the same draft class as Robinson, and the second-rounder from Alabama is coming off a three-year stint in Buffalo that saw him appear in just 25 of a possible 48 games. He only started in seven of those contests, including a career-high five last year, when PFF placed him a solid 34th among 78 qualified tackles. Despite his recent output, the Bills waived Kouandjio in May after an odd off-field incident in April. The 23-year-old was found partially undressed in a field in Elma, N.Y., not far from the scene of a car accident and taken to a nearby hospital, though he wasn’t arrested.