Bills offensive lineman Cyrus Kouandjio was involved in a bizarre incident with police earlier this week, according to Vic Carucci of The Buffalo News. Details on the incident are sparse, at the moment, but the tackle was found “not fully clothed” and in a field not far from the scene of a car accident. Kouandjio, who had climbed over an electric fence, screamed “Shoot me!” when approached by police. 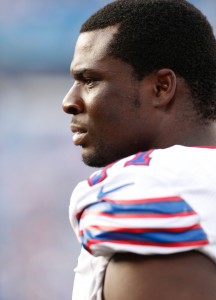 “We are aware of the matter involving Cyrus and are carefully monitoring his condition and gathering more information,” the Bills said in a statement. “We don’t have all of the details, so we won’t have any further comment at this time.”

Police suspect that Kouandjio pulled off of Route 400 and ran when he saw police lights. His exact role in the accident is not clear and there’s also no word on any potential mind-altering substances being involved. One has to presume that Kouandjio has undergone psychiatric evaluation and drug testing since the incident on Tuesday.

Kouandjio, 24 in July, has appeared in 25 games for Buffalo since being drafted in the second round of the 2014 draft. The DeMatha Catholic High School and University of Alabama product has been a solid contributor for the Bills, earning a higher score from Pro Football Focus last season than guys like Jake Matthews, Russell Okung, Doug Free, Andrus Peat, and other notables.