Under the terms of his extension with the Patriots, right tackle Marcus Cannon will earn $19.8MM in cash over the first three years of the deal, which, as Mike Reiss of ESPN.com notes (Twitter link), is often a key metric in contract analysis. So while Cannon’s new pact won’t approach that of Lane Johnson, who remains the highest-paid right tackle in the NFL, Cannon is still earning a top-tier RT contract through the three-year cash lens. Recent right tackles that have signed comparable deals include Mitchell Schwartz ($19.56MM in the first three years), Bryan Bulaga ($18.96MM), and Joe Barksdale ($16.5MM).

Here’s more from the AFC East, including another look at the Cannon extension:

The Giants are promoting offensive lineman Adam Gettis to the active roster, as Jordan Raanan of ESPN.com writes. In a related move, wide receiver Da’ron Brown has been signed to the practice squad, taking Gettis’ place. 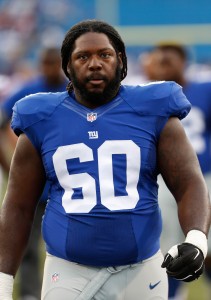 The G-Men were forced to do some roster shuffling after learning that guard Justin Pugh will miss multiple games with a knee sprain. The Giants will now try to do their best on the O-Line for the next 2-4 weeks without the player ranked as the league’s top interior lineman by Pro Football Focus. Gettis figures to slot behind John Jerry and Bobby Hart as the team’s only true guard off of the bench.

Brown, meanwhile, joins the practice squad after wide receiver Geremy Davis was plucked by the Chargers. Brown was one of 13 players to audition for the Giants this week and got himself a deal, along with fellow wide receiver Kevin Norwood. Brown, a Northern Illinois product, has made the practice squad rounds but has yet to appear in an NFL game. As a college senior in 2014, Brown caught 68 passes for 1,065 yards and six touchdowns, setting himself up to be taken in the seventh round of the ’15 draft by Kansas City.

The Patriots have added another member of the Gronkowski family to their organization, as they’ve agreed to sign fullback Glenn Gronkowski to their practice squad, reports Mike Florio of Pro Football Talk. Glenn, of course, is the younger brother of New England tight end Rob Gronkowski.

The younger Gronkowski signed with the AFC East rival Bills this year as an undrafted free agent from Kansas State and cracked their Week 1 roster, but the team cut him after its opening loss to the Ravens. Gronkowski auditioned for the Patriots in mid-September, and the club has now decided to add him to their taxi squad.

In order to create a practice squad roster spot for Gronkowski, the Patriots have cut wide receiver Da’Ron Brown, according to Doug Kyed of NESN (Twitter link). New England had just signed Brown earlier this week.