The Vikings worked out multiple kickers today, but they won’t be signing any of them at this time. Minnesota is planning to stick with Blair Walsh, a league source tells Adam Schefter of ESPN.com (on Twitter). 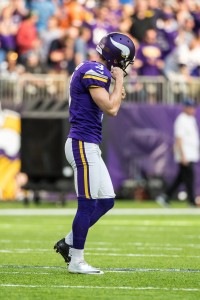 In last year’s Wild Card round, Walsh missed a chip shot field goal at the end of the game and ended the Vikings’ season. Before that, he was 30-for-31 on field goal attempts inside of 30 yards for his career. Since then, Walsh’s struggles have continued.

Most recently, Walsh missed an extra point attempt and had a field goal blocked as the Vikings lost to the Lions 22-16. This season, Walsh is just 12-16 on field goal attempts, giving him a completion percentage that puts him in the bottom third of the NFL.

Kai Forbath and Randy Bullock were among the kickers to audition for Minnesota.

2 comments on “Vikings To Stick With Kicker Blair Walsh”