As part of yesterday’s roster shuffle, the Jaguars also lost an offensive lineman for the season. The team announced that they’ve placed offensive guard Josh Walker on the injured reserve with an ankle injury. 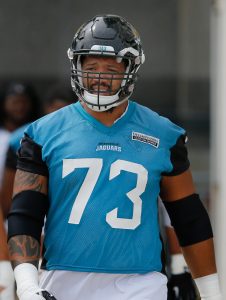 The 27-year-old Walker had missed that Jaguars last four games, but his placement on the IR was still a bit surprising. The lineman was a full participant at practice on both Wednesday and Thursday, and there was some optimism that he’d be able to play in this weekend’s contest against the Redskins. Ultimately, the team decided to open the extra roster spot.

The 2014 undrafted free agent out of Middle Tennessee State had started four of his five games this season. Pro Football Focus wasn’t particularly fond of his performance in 2018. Walker, who’s listed as an offensive tackle, ranked dead last among the 78 eligible players at the position.

While Jacksonville is losing one lineman, they’ll be welcoming another one back. As part of yesterday’s moves, the team activated lineman Josh Wells. The 27-year-old could easily slide back into the starting lineup alongside Chris Reed, Tyler Shatley, A.J. Cann, and Jermey Parnell.

Panthers wide receiver Jason Avant is looking forward to returning to Philadelphia this weekend, but the veteran is also looking back on his time with the Eagles. The 30-year-old was asked about his departure from Philly, and the wideout understood that he was on the outside looking in. Via the Philly Mag’s Tim McManus…

“You have an emerging [Jeremy] Maclin, you have a receiver draft that is high on talent that year and then you just paid Riley Cooper, so you kind of put the pieces together. Me and DeSean or me and Mac, we knew two of us would be gone,” he said. “We didn’t know which one it would be but you kind of [understand] situations over the years.

“I saw my role and what they had me doing and it just didn’t make sense for them financially to keep me to do some of the things I was doing. That’s no slight at Chip [Kelly] or anyone, it’s just a good business decision. Man, if I was in the business decision I would have looked at it and said: Look, to catch bubbles and to block, we can get a rookie to do that for a lesser price. That’s just a smart move by Howie Roseman and Chip.”

“Every player wants to play in one city for their whole career, but I understood the business side of it,” he said. “I love the organization, I love [Kelly and Roseman], I don’t have any hard feelings. I’ll be giving [Kelly] a big hug when I see him. I respect him and I respect what he is doing. They’re having a great season so far and I am really, really excited for a lot of the guys there, and I still talk to a lot of people. I’m happy they’re doing well — I just hope they don’t do well this week. That’s it.”