The Bears will place running back Ka’Deem Carey on injured reserve, according to Brad Biggs of the Chicago Tribune (Twitter link). Because he’s being shifted to IR before making Chicago’s initial 53-man roster, Carey isn’t a candidate to return later this year. 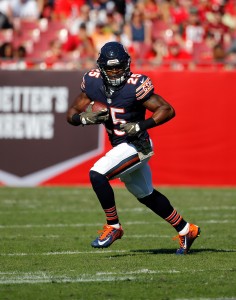 Carey, a fourth-round pick in 2014, has appeared in 36 games over three season with the Bears, but has only made one career starter. Last season, the 24-year-old averaged 3.9 yards per carry on 32 touches. While he won’t play for Chicago in 2017, it’s possible Carey agrees to an injury settlement and becomes a free agent.

The Bears are set at running back without Carey, as starer Jordan Howard is backed up by Jeremy Langford and rookie Tarik Cohen.

The latest from the North:

Let’s check out some notes from ESPN.com’s NFC writers on this Father’s Day evening…

We’ll round up today’s minor transactions here, including mid-to-late-round draftees agreeing to contracts, players being claimed off waivers, and the retirement of a former NFLer who most recently played in the Canadian Football League…..

We’ve passed along a couple Ravens updates from the combine already today, but Aaron Wilson’s latest piece for the Baltimore Sun includes so many notable nuggets on the team that we’ll need a new post to round them all up. Let’s dive in….