If he makes the roster, Josh Huff won’t be in uniform for the Saints’ first two contests next season. Josh Katzenstein of NOLA.com reports that the wide receiver has been suspended two games by the NFL “for violating the league’s policies on substances for abuse and personal conduct.” 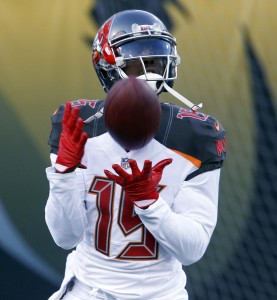 As Katzenstein details, the suspension stems from a 2016 arrest. During the incident, Huff was allegedly found carrying a handgun and a small amount of marijuana. All of the charges from the incident have since been dismissed. Huff entered a pre-trail intervention program following a conditional guilty plea, and the charges were subsequently dismissed.

The 2014 third-round pick hasn’t matched his production from his Eagles tenure. Following a 2015 campaign that saw him haul in 27 receptions for 312 yards and three touchdowns, Huff hasn’t been nearly as productive since that time. The 26-year-old had 16 receptions in 10 games with the Bucs and Eagles in 2016, and he sat out the entire 2017 campaign. He ultimately landed a futures contract with the Saints back in January.

The Saints’ contracts for linebacker Jayrone Elliott and wide receiver Josh Huff were disapproved by the league, according to the league’s transactions wire. It’s not immediately clear why the deals were voided, but Herbie Teope of the Times-Picayne (Twitter link) notes that the Saints were at the 90-man roster maximum before agreeing to deals with both players. It’s possible that the Saints just have to make a pair of roster moves before bringing both players back. 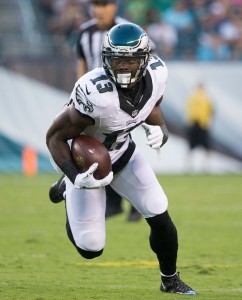 The Saints plan on bringing Huff back, Teope hears (on Twitter), but we have no word on Elliott one way or another just yet. The pair signed futures deals with New Orleans last week but are now considered free agents.

The Saints now must address their roster issue and refile with the league if it intends to bring one or both players back.

Huff entered the league in 2014 as a third-round pick with the Eagles. He has tallied 51 catches for 523 yards and four touchdowns. Signed by the Buccaneers down the stretch in 2016, Huff was cut heading into 2017. He worked out for the Saints on two occasions during the season.

Undrafted in 2014, Elliott spent three seasons with the Packers before joining the Cowboys in 2017. He has posted four sacks and an interception in 39 career games.

Josh Huff went from being the primary Eagles kick returner for three seasons to spending the 2017 season out of the league, but the wide receiver looks to soon have another chance. 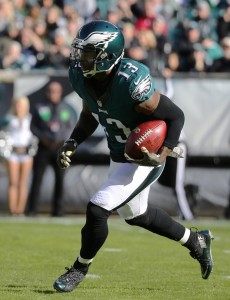 The Saints are planning to sign Huff on Friday, Aaron Wilson of the Houston Chronicle tweets. Wilson notes Huff has been training in Houston. He’s certainly traversed the NFL workout circuit over the past few months.

Huff twice worked out for the Saints this season, auditioning for New Orleans in September and December. In between, he received tryouts with the Jets, Texans and Redskins (twice) but remained a free agent. The Buccaneers sent Huff to free agency in September.

Arrested for unlawfully possessing a weapon in 2016, Huff did not see any jail time on that charge, instead receiving six months’ probation.

The 26-year-old wideout/return man played seven games with the Eagles and three with the Bucs in 2016 and has two kick-return touchdowns to his credit. Huff showed the Saints a glimpse of his receiving abilities in 2015, when he caught four passes for 78 yards and a touchdown against them that October.

The Saints are taking a look at Josh Huff. The wide receiver auditioned for the Saints on Tuesday, according to Aaron Wilson of The Houston Chronicle (on Twitter).

Huff was one of several Oregon products to wind up on Chip Kelly‘s Eagles. The third-round pick in the 2014 draft flashed some potential, but he was out of a job in ’16 when he was pulled over for speeding and found with a firearm and marijuana. He hooked on with the Bucs, but only appeared in three games and wound up missing this season’s initial 53-man cut.

After being displaced by Tampa Bay, Huff’s first known audition came with the Saints in September. Later, he showed his stuff for the Jets, Texans, and Redskins (twice), but has yet to land a deal. Perhaps on this audition – his second with New Orleans in 2017 – he’ll find a new NFL home.

Statistically, Huff’s best season came in 2015 when he had 27 grabs for 312 yards and three scores. He gave the Saints an up close look at his potential in October of that season when he had four receptions for 78 yards, including a 41-yard TD in the first half.

At 10-4, the Saints are in the catbird seat in the NFC South. They can help secure the divisional crown with wins over the Falcons and Bucs in the final two weeks.