Technically, Watson will first be placed on injured reserve with a pectoral injury. Then, when he’s healthy, he’ll be released and permitted to sign with any team. Ian Rapoport of NFL.com (on Twitter) hears that Watson’s pec strain should be cleared up in a couple of weeks, so it sounds like he’ll be able to catch on with another team before the season begins.

Watson came to Denver on a three-year, $18.75MM contract last year. Although he is talented, injuries have plagued him throughout his career. Last year, a foot injury shut Watson down in November, meaning that he has missed 48 career games out of 80 possible appearances for the Raiders and Broncos. The former second round pick has yet to play in more than 12 games in any given campaign.

This year, the Broncos were giving some thought to moving Watson from right tackle to guard, but they bailed on that experiment with a few weeks to go before the start of the season. Instead, the Broncos will start Ronald Leary and Connor McGovern at the guard spots with the likes of Max Garcia and Billy Turner in support. Tackle Cyrus Kouandjio and center Sam Jones may also be asked to play guard, if necessary.

The trade that will send Jamar Taylor to his third NFL team will come with an adjusted contract. Taylor will make less for the Cardinals this year than he was supposed with the Browns, with Kent Somers of AZCentral.com reporting (on Twitter) the veteran cornerback will earn $3.5MM in base salary — down from $4.25MM. The additional $750K will be pushed onto the Cards’ 2019 balance sheet. The Cardinals and Browns have been discussing a Taylor deal since the draft, Mike Jurecki of ArizonaSports.com tweets, adding that the Bashaud Breeland avenue is likely closed after this trade. Taylor is under contract for two more seasons. Finding a capable Patrick Peterson counterpart has been a problem in Arizona for a while, and Taylor will have a decent chance to earn that No. 2 job. Now-well-traveled Bene Benwikere, former Jets corner Marcus Williams and one-time third-round pick Brandon Williams represent the top competition.

Here’s the latest from the West divisions, keeping with the subject of cornerbacks who have worn Browns colors recently.

Now that the Vikings are expected to be in the mix for Kirk Cousins, the Broncos’ chances of acquiring him likely lessened compared to what they were before Minnesota became a serious contender. But Denver has no plans to bow out.

John Elway said the team would explore all options this offseason to upgrade at quarterback, and Charles Robinson of Yahoo.com reports Cousins is far and away the option the Broncos prefer. Ben Goessling of the Minneapolis Star-Tribune adds (via Twitter) the Cousins-to-Broncos rumors are flowing in Indianapolis. 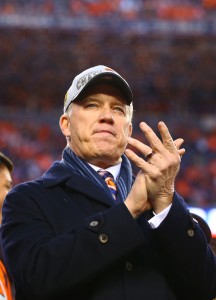 Robinson notes the Vikings and Jets are expected to be the other top Cousins pursuers. Ralph Vacchiano of SNY.tv noted “rampant speculation” around the Combine is sending Cousins to Minnesota.

The Broncos do not possess the cap space the Jets do, with New York now holding more than $90MM. The Vikings also stand to sit with nearly $50MM as of Friday. But Robinson reports the team is looking at ways it increase its cap room. Denver is currently sitting on just less than $25MM, according to OverTheCap, but Robinson notes the Broncos are conjuring scenarios they can increase that to north of $40MM and perhaps as high as $50MM. Denver is likely parting with Aqib Talib ($11MM in cap savings), and Elway did not give assurances C.J. Anderson ($4.5MM) would be back for a fifth season as the Broncos’ starting running back.

However, Elway said Demaryius Thomas, Emmanuel Sanders and Derek Wolfe would return. He also indicated (via Nicki Jhabvala of the Denver Post, Twitter link) embattled right tackle Menelik Watson ($4.5MM in possible savings with $2.7MM in dead money) would be back. That’s somewhat surprising given that Watson allowed the third-most sacks in the league despite playing in only seven games. Beyond restructures, and high-profile restructures haven’t been too common in Elway’s GM tenure, there aren’t other obvious avenues to create notable space.

Robinson notes a Cousins deal might be closer to a three- or four-year agreement and adds a shorter-term deal — one that would allow him to be in line to sign a new deal before his age-33 season — would be attractive for the passer. The Broncos are likely going after Cousins to help their Super Bowl core, and with those players being in their late 20s or early 30s, a three- or four-year Cousins agreement would line up with that. Although, a shorter-term doesn’t provide the kind of security a franchise would presumably seek in being involved in this kind of pursuit.

Cousins is expected to take visits to meet with teams, and Robinson writes the Broncos’ experience signing Peyton Manning after he made Denver his first visit in 2012 could provide an edge for the Colorado franchise. The Yahoo reporter compares the Broncos’ level of interest in Cousins to Manning.

The Broncos announced that they have placed right tackle Menelik Watson on injured reserve with a foot injury. To take his place, they have signed Cyrus Kouandjio.

Watson came to Denver on a three-year, $18.75MM contract this offseason. Although he is talented, he is no stranger to missing time. Heading into 2017, Watson had already missed 37 of a possible 64 regular-season games due to various injuries over the course of four seasons, including an entirely lost 2015. With his 2017 over, the tally is now up to 48 missed games out of 80 possible appearances.

Watson lost a significant amount of weight in the offseason in an attempt to stay healthy, but he is still in search of his first complete season. The former second round pick of the Raiders has yet to play in more than 12 games in any given campaign.

The Broncos have first-round pick Garett Bolles starting at left tackle with Donald Stephenson and Elijah Wilkinson in reserve. Stephenson has been sidelined thanks to a calf injury he suffered prior to Week 7, so Wilkinson or Kouandjio could conceivably draw the next start at RT.