Breeland To Meet With Colts, Cardinals

Free agent cornerback Bashaud Breeland will visit the Colts on Wednesday and the Cardinals on Thursday, a source tells Rob Demovsky of ESPN.com (on Twitter). Demovsky hears his foot issue is healed and he is expected to be able to pass all medical tests. 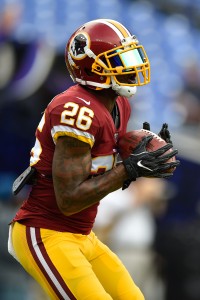 Breeland was one of the top cornerbacks on the market this offseason and agreed to a three-year, $24MM deal with the Panthers in March. Days later, the Panthers 86’d the deal due to an infected cut on his foot that prevented him from passing a physical.

Freak accident aside, Breeland has been largely healthy over the course of his four-year NFL career. The 26-year-old appeared in all but one of the Redskins’ games last season and has missed just four possible regular season games since entering the league in 2014.

Last year, Breeland tallied 47 tackles and one interception, which was returned 96 yards for a touchdown against the Chargers. Pro Football Focus bestowed a middling grade on Breeland as he played opposite of star Josh Norman, but he did improve from 2016 to ’17, per the advanced metrics.

The Cardinals’ need for a quality partner alongside Patrick Peterson has been well documented. This offseason, the Cardinals brought in free agents Bene Benwikere and Marcus Williams to compete with Brandon Williams for the second starting role. If healthy, Breeland would be their clear CB2.

The Colts, meanwhile, project to start Quincy Wilson and Kenny Moore at cornerback after losing Rashaan Melvin to free agency.

3 comments on “Breeland To Meet With Colts, Cardinals”