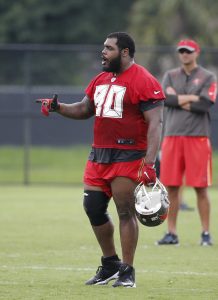 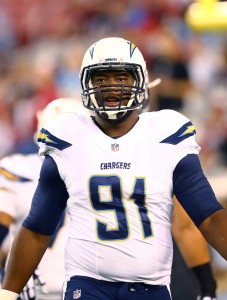 The Chiefs have made a series of roster moves in advance of their game against the Saints this Sunday, Terez A. Paylor of the Kansas City Star reports. The club has signed four players – defensive linemen Kendall Reyes and Rakeem Nunez-Roches, linebacker Ramik Wilson and cornerback Terrance Mitchell – to its active roster. Additionally, the Chiefs have waived defensive lineman Nick Williams, and placed both defensive end Allen Bailey and linebacker Justin March-Lillard on injured reserve (links to Twitter).

Of the four newest Chiefs, Reyes is the most notable. A second-round pick in 2012, Reyes was a starter on San Diego’s defensive line from 2013-2015. Reyes then joined the Redskins on a one-year, $2.5MM deal during the offseason. He cracked their roster to begin the year, but the team cut him earlier this month after a groin injury limited him. In total, the 27-year-old has racked up 66 appearances, 50 starts and 13.5 sacks in his NFL career.

Both Wilson and Nunez-Roches were member of the Chiefs’ 2015 draft class who are now returning to their roster (the former had been on their practice squad). Kansas City selected Wilson in the fourth round, and the ex-Georgia Bulldog appeared in 11 games, made two starts and amassed 13 tackles in his rookie year.

Nunez-Roches, formerly of Southern Miss, went in Round 6. He saw action in seven games last year and remained with the Chiefs at the outset of this season, but they cut him after Week 1. Notably, Nunez-Roches is the first Belizean-born player in league history.

Mitchell landed with the Cowboys in the seventh round of the 2014 draft and will now join his fifth organization. He debuted last season and garnered eight appearances with the Cowboys and Bears, also adding an interception.

Williams, 26, went to Pittsburgh in the seventh round of the 2013 draft, but he didn’t suit up until the next season as a member of the Chiefs. He picked up 21 appearances with KC before the club cut him.

Not to be lost in the shuffle are the long-term injuries to Bailey and March-Lillard, both of whom started the Chiefs’ first five games of the season.

Bailey, a sixth-year man, has started in all 31 of his appearances dating back to 2014. He was on the field for 54.9 percent of the Chiefs’ defensive snaps before going on IR with a shoulder injury, but Pro Football Focus ranks his overall performance just 93rd among 117 qualifying interior D-linemen through five weeks.

Having played in 49.9 of their defensive snaps, the Chiefs have also relied a fair amount on March-Lillard. In his first pro action, the 2015 undrafted free agent from Akron has accrued 22 tackles. PFF rates his output 49th among 85 LBs.

The Redskins have cut defensive lineman Kendall Reyes, a person familiar with the situation tells Mike Jones of The Washington Post (on Twitter). Reyes joined the Redskins as a free agent this offseason but the team was not happy with his play in the offseason or in the first month of the regular season. Reyes’ one-year, $2.5MM deal included $1MM fully guaranteed, so the Redskins will be on the hook for a good chunk of money.

Reyes was dealing with a groin injury through the first month of the season and missed Week 2 against the Cowboys and Week 3 against the Giants as a result. He returned to action on Sunday against the Browns, but coaches weren’t thrilled with how he looked. With Reyes gone, the Redskins are left with Chris Baker, Ziggy Hood, Ricky Jean-Francois, Cullen Jenkins, Matt Ioannidis, and Anthony Lanier on the defensive line.

Reyes, a second-round pick in 2012, was a starter on San Diego’s defensive line from 2013-2015. The 27-year-old racked up 10.5 sacks during his first two years in the league, but his numbers have been more modest in recent seasons. In 2015, Reyes picked up a pair of sacks to go along with 32 tackles and his first career interception.

While the Chargers leaned on Reyes heavily during his four years with the club, Pro Football Focus wasn’t particularly fond of his performance last season. PFF ranked the Connecticut product 120th out of 123 qualified interior defenders, assigning him the third-worst grade as a run defender among those players.