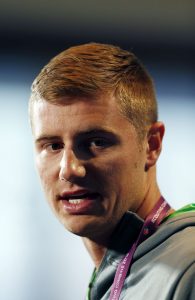 Luke Bowanko will make his way to New England, moving to a new team for a third straight season. The Patriots agreed to terms with the free agent offensive lineman, Field Yates of ESPN.com tweets. 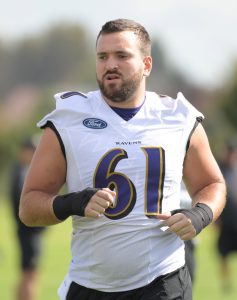 A former sixth-round Jaguars pick in 2014, Bowanko figures to compete for a depth spot as part of the Pats’ interior line behind the Joe Thuney/David Andrews/Shaq Mason trio. Bowanko has been a backup for the past three years but was a full-season starter at center as a rookie.

The Jags traded Bowanko to the Ravens just prior to last season, and he played in 16 games (with one start) during the 2017 slate.

New England re-signed LaAdrian Waddle and added Matt Tobin this offseason. Bowanko, 26, will join them in competing for a spot on the 53-man roster.

The Jaguars have traded center Luke Bowanko to the Ravens, a source tells Ian Rapoport of NFL.com (on Twitter). It’s not immediately known what the Jaguars are getting in the swap, but it’s likely a late round draft pick.

Bowanko has an opportunity to get playing time right off the bat given the injuries on the Ravens’ offensive line. Baltimore brought Jeremy Zuttah back into the fold in August to fill the gap at center, but he was released on Friday along with a host of other notable veterans.

Bowanko, a sixth round pick in the 2016 draft, has spent time on the Jaguars’ 53-man roster and practice squad over the last three years. In December, he was called back up to the 53-man roster when Julius Thomas and Jared Odrick were placed on injured reserve.

Bowanko is the second offensive lineman to come to the Ravens via trade this week. On Friday, Baltimore acquired veteran interior lineman Tony Bergstrom from the Cardinals.

Two 2015 free agent signings who haven’t quite panned out to the Jaguars’ liking will spend the rest of the season on injured reserve, with the Jags shelving Julius Thomas and Jared Odrick, Ryan O’Halloran of the Florida Times-Union tweets. 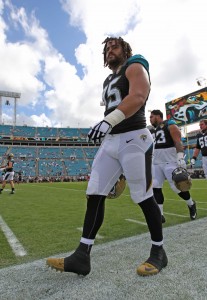 Offensive lineman Luke Bowanko and running back Bronson Hill will ascend to the 53-man roster, Bowanko from the PUP list and Hill from the practice squad, respectively, per O’Halloran.

Sidelined with a back injury, Thomas has not played since Nov. 20 and has not delivered the kind of production the Jaguars envisioned when they signed him to one of the top tight end contracts in the league at five years and $46MM. Of course, not much has gone right for the Jags this season, and Thomas isn’t the only offensive talent to underperform. The sixth-year pass-catcher has 30 receptions for 281 yards and four touchdowns in nine games.

Odrick, who will miss the rest of the season due to a spate injuries, inked a five-year deal worth $42.5MM last year and also hasn’t lived up to the contract. He has one sack this season in six games. A former Dolphins first-round pick, Odrick started every game in 2015 but has seen numerous maladies sidetrack him during this his seventh season. Triceps, quadriceps, ankle and shoulder ailments plagued Odrick, who profiles as a potential cap casualty in the spring.

The Jags can save $8.5MM off their 2017 cap by cutting Odrick in March. His contract structured as a two-year deal with an escape hatch after 2016, Jacksonville would not take on any dead money by shedding it before the ’17 league year begins.

Thomas, meanwhile, would bring a $3.6MM dead-money charge. The former Broncos tight end who came to north Florida having back-to-back seasons of 12 touchdown receptions has totaled nine in two years with the Jags, and the injury troubles that induced the former 2011 fourth-round pick to miss 28 games in four Denver seasons have continued in Jacksonville. Although this season didn’t bring the kind of ankle trouble Thomas experienced during his first five, his deal will likely be a discussion point for what is almost certain to be a revamped Jags decision-making staff in 2017.