Fullback Dan Vitale is ending his playing career. In a post to his LinkedIn page (via NESN’s Doug Kyed on Twitter), Vitale said, “I feel like my body is just ready to move on. I’m looking for a new role and would appreciate your support.” 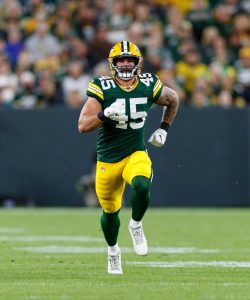 Vitale, 27, entered the league as a sixth-round pick of the Buccaneers in 2016. He did not survive final cutdowns following his first career training camp, but he ended up back on Tampa’s taxi squad. The Browns poached him off the p-squad in October 2016, and over the 2016-17 campaigns, Vitale would appear in 24 games (nine starts) for Cleveland.

The Northwestern product caught on with the Packers’ practice squad in October 2018. He spent two seasons in Green Bay, playing in 20 games (five starts) for the Pack. His 2019 season with the club saw him post career highs in offensive snaps (170), catches (seven), and receiving yards (97). He also registered the only carry of his career, a three-yard tote.

Obviously, he was known more for his blocking and special teams acumen, and he signed a one-year deal with the Patriots in March 2020. The Pats knew that longtime stalwart James Develin was about to retire, and given the club’s usage of fullbacks and Develin’s impending departure, it seemed Vitale had found a good landing spot.

But he opted out of the 2020 season due to COVID-19, and the Patriots cut him last month. Instead of trying to play for another NFL club, he will now turn his attention to other endeavors.

In his LinkedIn post, Vitale noted that he graduated from Northwestern with an economics degree, and that he minored in business institutions and integrated marketing communications.

We at PFR wish Vitale the best in the next stage of his life.

A fourth player has decided to opt out this afternoon. Patriots fullback Danny Vitale informed the team of his intentions to bypass the 2020 season, Jarrett Bell of USA Today reports.

Vitale played 170 snaps last season with Green Bay, catching 12 passes for 97 yards. His one-year Patriots contract will toll to 2021. Since he is not believed to be at increased risk for COVID-19 complications, Vitale is set to receive a $150K stipend — rather than his $1MM base salary — and see his contract toll to 2021.

The Patriots continue to make smaller under the radar moves as they re-tool their team in the wake of Tom Brady‘s departure. New England is signing fullback Dan Vitale, his agent Chris Cabbott told Tom Pelissero of NFL Network (Twitter link).

The Pats and Bill Belichick like to use fullbacks a lot, so this is a significant move. This also could spell the end of the road for the Patriots’ longtime fullback James Develin. Develin signed with New England back in 2012 and has been their full-time fullback since 2013. He was limited to only two games in 2019 because of a neck injury, and his absence had a big impact on their running game.

We haven’t heard much about him since, and it’s possible that his neck injury is going to prevent him from playing. Either way, it looks like the Pats will be moving forward with Vitale. Vitale spent last year as the Packers’ fullback, catching seven passes for 97 yards while playing about 16 percent of the offensive snaps. In 2018, Develin was used on more than 35 percent of New England’s snaps.