The Packers are set to sign wide receiver Seth Roberts, according to Rob Demovsky of ESPN.com (Twitter link). To make the numbers work, he’ll first be added to the practice squad before promoted to the varsity squad.

Roberts got a one-year, $3.75MM deal from the Panthers back in March, and ended up only catching four passes for 31 yards for the team. The Panthers started shopping Roberts in August, but they couldn’t find any takers. He lasted nearly half-a-season before being released earlier this week.

A 2014 UDFA from West Alabama, Roberts spent the first five years of his career in Oakland. He had some real success with the Raiders, notching at least 397 yards in four straight seasons from 2015-18. He also had five touchdowns in two of those campaigns. He spent last year with the Ravens and finished with 271 yards and two scores. All in all, Roberts has notched 183 catches, 2,128 yards, and 15 touchdowns over the course of his career.

Roberts’ Green Bay debut could come on Sunday when the 5-1 Packers face the 1-5 Vikings.

Seth Roberts hasn’t seen many balls come his way this season, and now he’ll be looking for a new home. The Panthers have cut the veteran receiver, the team announced Monday.

We heard right after final cuts that Carolina was shopping Roberts, but obviously they couldn’t find any takers. Roberts got a one-year, $3.75MM deal from the Panthers back in March, and ended up only catching four passes for 31 yards for the team. Despite the lack of production he was still receiving real playing time, and he played 41 percent of the defensive snaps just yesterday against the Saints.

A 2014 UDFA from West Alabama, Roberts spent the first five years of his career in Oakland. He had some real success with the Raiders, notching at least 397 yards in four straight seasons from 2015-18. He also had five touchdowns in two of those campaigns. He spent last year with the Ravens and finished with 271 yards and two scores.

Carolina has plenty of talent at receiver with the likes of D.J. Moore, Robby Anderson, and Curtis Samuel, so Roberts wasn’t really needed much. Still only 29, Roberts should resurface on a cheap deal with a team in need of receiving help at some point soon.

Seth Roberts may have survived final cuts, but it sounds like the Panthers wideout might not last that long on the roster. Joe Person of The Athletic reports (via Twitter) that the veteran receiver is available via trade.

The 2014 undrafted free agent out of Alabama has put together a solid career, and he only missed a pair of regular season games for the Raiders between 2015 and 2018. Following a 2019 campaign with the Ravens that saw him haul in a career-low 21 receptions, Roberts signed with the Panthers back in March.

With a wideout corps that’s led by the likes of D.J. Moore, Robby Anderson, and Curtis Samuel, it’s a bit surprising that the Panthers aren’t eager to stick with the 29-year-old Roberts. The veteran has shown that he can be a reliable target; between 2015 and 2018, Roberts averaged 39.5 receptions, 456.5 receiving yards, and 3.3 touchdowns per season.

Considering how many NFL teams are desperate for wideout help, it wouldn’t be shocking if Roberts ends up getting dealt, although his $3.75MM salary could end up being a hurdle.

Seth Roberts is heading to Carolina. The wideout is signing with the Panthers, reports NFL.com’s Ian Rapoport (via Twitter).

The former undrafted free agent spent the first five seasons of his career with the Raiders, and he finished with at least 30 receptions and (basically) 400 receiving yards each year between 2015 and 2018.

Roberts was cut by the Raiders last offseason, and he ended up catching on with the Ravens. He saw a reduced offensive role in his 16 games with Baltimore, hauling in 21 receptions for 271 yards and two scores. He also added a pair of catches in Baltimore’s playoff loss to the Titans.

The Ravens are signing former Raiders wide receiver Seth Roberts to a one-year deal, a source tells Adam Schefter of ESPN.com (on Twitter). Roberts became a free agent earlier this week when Oakland cut him loose.

Roberts was due to make a $4.45MM base salary with the Raiders in 2019 and up to $4.8MM through bonuses. However, his base pay was completely non-guaranteed, allowing the Raiders to shed the entire sum of his contract.

Roberts, 28, had 45 receptions for 494 yards and two touchdowns in 2018. In the previous year, he had similar figures with 43 catches for 455 yards and one score. Roberts has a career 11.6 yards per reception average, but he was more of a deep threat in his breakout 2015 season when he averaged 15 yards per grab.

The Ravens are still expected to target wide receivers in the draft, but the presence of Roberts may take off some of the pressure.

“One of the biggest things that we have to do is just take some at-bats and swing,” GM Eric DeCosta recently said of the team’s WR strategy in the draft. “It’s hard to be a .400 hitter if you’re only at bat twice. We’ve got to take some chances. We’ve got to find some guys that we like and try to appreciate the really good football players, the guys that make plays.”

Roberts joins a WR group that lost John Brown and Michael Crabtree this offseason. He’s just the third receiver on the roster who has actually caught a pass in the NFL, along with Willie Snead and Chris Moore.

Last month, the Raiders swung a blockbuster trade for Antonio Brown, signed ex-Charger Tyrell Williams, and released veteran Jordy Nelson. After Grant entered the mix, there was simply no room for Roberts, who inked a three-year, $12MM extension with the Raiders in 2017.

Roberts was due to make a $4.45MM base salary this season and up to $4.8MM through bonuses. However, his base pay was completely guaranteed, allowing the Raiders to shed the entire sum of his contract.

The Raiders want to trade Seth Roberts for a draft pick, sources tell Vic Tafur of The Athletic (on Twitter). Roberts inked a three-year, $12MM extension with the Raiders last summer, but new head coach Jon Gruden might not have a place for him on the team.

This spring, Gruden brought new blood to the wide receiver group by signing Jordy Nelson and releasing Michael Crabtree. Then, on Thursday, he swung a deal for Steelers wide receiver Martavis Bryant. The acquisition of Bryant cost the Raiders a third-round pick and they’re now looking to recoup some draft capital.

Roberts, 27, set new career highs in 2017 with 43 catches for 455 yards and caught 66.2% of the balls thrown his way. Right now, Roberts is no higher than fourth on the team’s WR depth chart and the selection of another receiver on Friday night would put him squarely on the bubble.

It’s not clear what the Raiders can get for Roberts, but it’s likely to be less than the third-round choice they paid for Bryant.

The Raiders will be parting ways with Cordarrelle Patterson and sending the former All-Pro kick returner to the Patriots, Vic Tafur of The Athletic tweets. Barstool Sports first reported the deal. The Raiders have since announced the deal.

The AFC teams will exchange late-round picks in this deal, Field Yates of ESPN.com tweets. Ian Rapoport of NFL.com confirms as such, reporting (via Twitter) the Raiders will receive a fifth-rounder and send out a sixth-round choice. Oakland previously did not possess a fifth-round pick in this year’s draft. 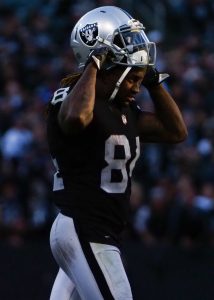 Patterson has one more year remaining on his contract, and he’ll be changing teams for the second straight offseason. The Patriots will receive a player who has two first-team All-Pro honors to his credit, those coming during the former first-round pick’s time with the Vikings.

The sixth-year wideout stands to count $3.25MM against the cap this season. He worked as an auxiliary Raiders pass-catcher and gadget player during his one season in Oakland, accumulating 430 yards from scrimmage and scoring twice — both on runs. He averaged 9.3 yards per tote on 13 attempts.

Dion Lewis served as New England’s primary kick returner last season. He’s since signed with the Titans to leave that role vacant, and a franchise that’s valued special teams immensely under Bill Belichick will acquire a dangerous return man to fill Lewis’ spot. Patterson has not served as a punt returner much in his career, so it’s likely the 6-foot-2 cog will be installed on the Pats’ kick-return unit and potentially have a role as a backup wide receiver.

The 2013 first-rounder has not lived up to expectations as a receiver, but he landed on the 2013 and ’16 All-Pro teams for his return work. Patterson has six career kick-return scores, with three of those coming as a rookie.

Oakland has rearranged its wide receiving corps this offseason, jettisoning its No. 2 and No. 4 WRs from a season ago. Although, Jordy Nelson replaced Michael Crabtree. The team may be in need of some depth to take Patterson’s place. Seth Roberts is due back after receiving a $2MM roster bonus late this week. His $2.25MM base salary is now fully guaranteed.