The Ravens worked out running back Eddie Lacy on Thursday, according to Mike Florio of PFT. Lacy was out of the NFL last season, but he’s looking to get back in the game. 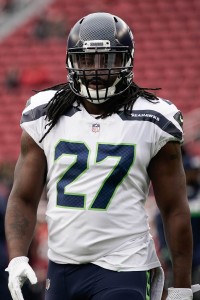 Lacy, 29 in June, was the league’s Offensive Rookie of the Year in 2013 and dazzled with his powerful running style in his younger days. Unfortunately, he hasn’t done much as of late. Lacy’s weight issues held him back over his final two years with the Packers and he averaged just 2.6 yards with the Seahawks in 2017.

The Ravens could give Lacy a prime opportunity to reassert himself as a go-to ball carrier. However, it’s not clear if Lacy has his weight in check. If signed by the Ravens or another NFL team, Lacy is likely to have incentives and stipulations built into his deal to encourage keeping the pounds off.