Kerry Hyder is returning to the Bay Area. The 49ers are signing the defensive end to a one-year, $1.5MM deal, according to ESPN’s Field Yates (Twitter link). He adds that half of the contract’s value is guaranteed, while the other half is available through sack incentives. 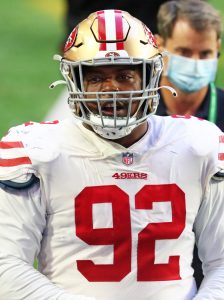 Hyder, who will be 31 by the start of the 2022 season, was released by the Seahawks last week along with fellow veteran Carlos Dunlap. His time in Seattle was underwhelming, considering the year he was coming off of previously. In 15 games (including seven starts), he totalled 33 tackles, 1.5 sacks and two fumble recoveries. He began his career with the Lions, and spent one year with the Cowboys in 2019.

By returning to San Francisco, though, Hyder will look to replicate his career-best campaign in 2020, which he spent with the 49ers. He started 14 of 16 games, registering 49 stops, 8.5 sacks and 10 tackles for loss. With a 70% snap share, that season also marked his biggest workload. The Texas Tech alum will reunite with a familiar face on the coaching staff in Kris Kocurek, head of the team’s defensive line.

Hyder will join a San Francisco front already featuring the likes of Nick Bosa, Arik Armstead and Dee Ford. Even if he is unable to duplicate his success from two years ago, he should still play a significant role in the team’s pass rush, which ranked fifth in the league in sacks last season.

While the Seahawks reached a new agreement with Dunlap shortly after cutting him last year, it is unclear if the veteran defensive end remains in the team’s plans this time around. Hyder joined the Seahawks after spending the 2020 season with the 49ers. These two join Benson Mayowa as D-linemen moved off Seattle’s roster.

The Seahawks are releasing Dunlap with a post-June 1 designation, Jeff Howe of The Athletic tweets, softening the dead-money blow for 2022. The team cannot recoup the extra funds until that date but it defrays some of Dunlap’s dead-cap hit until 2023. Because of Dunlap’s post-June 1 designation, the Seahawks will save just more than $7MM by shedding these two contracts.

Dunlap, 33, led the Seahawks with 8.5 sacks last season. Coming over from the Bengals in a 2020 deadline deal, Dunlap helped a struggling Seahawks defense rebound in that season’s second half. The former Cincinnati Pro Bowl rusher notched five of his six 2020 sacks as a Seahawk, helping them to the playoffs. Dunlap is four sacks away from 100 for his career. His 2021 production makes it likely he will catch on for a 13th NFL season.

Formerly with the Lions, Hyder has made single-season stopovers in the NFC West. He did not fare as well in Seattle as he did in San Francisco, seeing his sack total drop from 8.5 as a 49er to 1.5 as a Seahawk. Hyder, 30, did play 15 games last season and is a seven-year veteran. He figures to bring rotational value, at least, to another team as a free agent.

The Seahawks’ pass-rushing plans are coming into focus. Shortly after they agreed to re-sign Benson Mayowa, the Seahawks agreed to terms with defensive end Kerry Hyder.

Hyder will join the Seahawks on a three-year, $16.5MM contract, Adam Schefter of ESPN.com tweets, adding that the former Lions, Cowboys and 49ers D-end can make up to $17.5MM on this accord.

This deal marks a big pay bump for Hyder, who signed with the 49ers for one year and $1.5MM during the 2020 offseason. Despite the salary cap reduction, the 29-year-old pass rusher will cash in on a midlevel accord. Hyder is coming off an 8.5-sack season. He has two seasons of at least eight sacks, with the other coming back in 2016 with Detroit.

For a 49ers team that lost Nick Bosa and Dee Ford at the beginning of the season, the Hyder signing proved pivotal. The former UDFA led the team in sacks and recorded 18 QB hits and 10 tackles for loss. Hyder recorded just two sacks over the previous two seasons, however, and missed all of 2017.

This signing might impede Seattle from bringing back Carlos Dunlap, whom the team released earlier this month. However, it remains to be seen how Dunlap will fare on the market.

The 49ers have reached a one-year deal with edge rusher Kerry Hyder, according to Ian Rapoport of NFL.com (Twitter link).

Hyder, 28, appeared in 16 games as a reserve for the Cowboys in 2019 after spending the previous three seasons with the Lions. Last year, Hyder played on 40% of Dallas’ defensive snaps, posting one sack and four quarterback hits.

Hyder’s best season came in 2016, when he managed a career-high eight sacks with Detroit. His defensive line coach that year was Kris Kocurek, who now holds the same role with the 49ers.

Nick Bosa and Dee Ford will start at defensive end for San Francisco, so Hyder will compete with Ronald Blair, Kentavius Street, and others for playing time on the edge.

The Cowboys have been very busy visiting with free agents and lining up other visits today, but the club did make one transaction official. Per Aaron Wilson of the Houston Chronicle, the Cowboys signed former Lions DL Kerry Hyder (Twitter link). It will be a one-year pact for Hyder, per David Moore of the Dallas Morning News (via Twitter).

Detroit opted to non-tender Hyder, a former UDFA, earlier this month. Now 27, Hyder missed the entire 2017 season due to a torn Achilles and only appeared in seven games last season. With just one sack last year and a limited sample of work, it’s not surprising the Lions didn’t want to give him the lowest tender.

On the other hand, he did post eight sacks in 2016, and as Jon Machota of the Dallas Morning News tweets, Hyder is a good fit as a defense end in the Cowboys’ 4-3 scheme. He could be a low-cost boon to a pass rush that needs some reinforcements.

The Lions will not tender defensive lineman Kerry Hyder, according to Ian Rapoport of NFL.com (on Twitter). Hyder had eight sacks two years ago, but the Lions will allow him to explore the open market as an unrestricted free agent.

Hyder, 27, missed the entire 2017 season due to a torn Achilles and only appeared in seven games last season. With just one sack last year and a limited sample of work, it’s not surprising the Lions didn’t want to give him the lowest tender, which would’ve paid him $2.025MM next season. The Texas Tech product was an undrafted free agent back in 2014, and it took him a while to find his footing in the league.

He initially signed with the Jets, but was cut after his first preseason and signed to the practice squad. He then latched on with the Lions the following year, and spent most of the 2015 season on their practice squad. He made the 53-man roster in 2016, and came out of nowhere to rack up eight sacks. But the Achilles injury derailed what looked to be a promising career, and he fell out of favor with new coach Matt Patricia.

He was inactive most of the year, and recorded his only sack in Week 17. Fortunately for him he’s still relatively young, and thanks to the potential he showed in 2016, he should be able to find a new home relatively soon. With the Lions also unlikely to retain Ezekiel Ansah, their defensive line will look a lot different next year.