The Patriots have re-signed center/guard Brian Schwenke, according to Field Yates of ESPN.com (on Twitter). The new one-year deal will pay $895K and should keep him with the defending champs in 2019.

Schwenke, 28 in March, spent his entire career with the Titans until he hooked on with the Pats last summer. His first season in New England, unfortunately, did not go as planned. Schwenke was active for just three games and played in just four offensive snaps before a foot injury landed him on IR in November.

Before signing with the Pats as a free agent, Schwenke appeared in 60 games for the Titans with 30 starts. He’s no longer an NFL starter, but the new deal will give him an opportunity to support interior starters Joe Thuney, David Andrews, and Shaq Mason.

Given Schwenke’s injury history and the timing of the deal, it’s unlikely that there’s much in the way of guarantees. He’ll have to prove his health over the next several months in order to secure his spot on the Patriots for Week 1.

The Patriots have placed center/guard Brian Schwenke on injured reserve, according to a club announcement. Schwenke missed the last two games with a foot injury, which is presumably the same issue that is ending his season prematurely.

Schwenke, 27, spent his entire career with the Titans until he hooked on with the Pats over the summer. He missed the Pats’ initial cut, but was re-signed on Sept. 4. Despite having 30 games of experience as a starter, he dressed for only three contests this year and was on the field for four snaps in total.

Schwenke has been a backup for the past two seasons. Injuries essentially brought an end to his starting days, with the former 2013 fourth-round pick missing 23 games over his first three seasons. But, he suited up for 16 Titans regular-season games in each of the past two years.

Brian Schwenke will rejoin the Patriots after a brief stay as a free agent. The Pats re-signed the veteran interior offensive lineman, Mike Reiss of ESPN.com tweets. 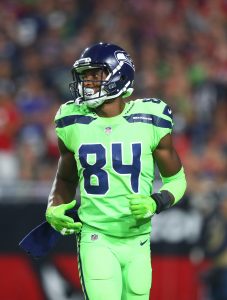 Schwenke will take the roster spot of wide receiver Amara Darboh, Mike Garafolo of NFL.com reports (via Twitter). The Patriots claimed Darboh off waivers from the Seahawks, but the 2017 third-round pick will be waived two days later with an injury designation. He’ll revert to New England’s IR if unclaimed on waivers this time around.

Darboh will undergo an unspecified surgery on Tuesday, Garafolo adds. This will again deplete the Patriots’ depth at wideout. Only Chris Hogan, Coradarrelle Patterson, Phillip Dorsett and the recently claimed Chad Hansen reside as healthy Pats receivers at this point.

New England made Schwenke one of its weekend cuts but will reinstall him as an interior-line backup. He joins LaAdrian Waddle and Ted Karras as a second-string lineman.

A five-year Titans cog, Schwenke initially caught on with the Patriots when he signed in late July. While his roster spot is obviously not secure, Schwenke stands to slot in behind David Andrews and guards Joe Thuney and Shaq Mason.

Since beginning his career as a starter, the 27-year-old blocker’s been a backup for the past two seasons. Injuries essentially brought an end to his starting days, with the former 2013 fourth-round pick missing 23 games over his first three seasons. But he suited up for 16 Titans regular-season games in each of the past two years.

The Patriots have agreed to sign offensive lineman Brian Schwenke, Field Yates of ESPN.com tweets. Schwenke, a guard/center, spent the last five seasons with the Titans.

Schwenke missed 23 regular season games from 2013-2015, but he has now turned in back-to-back 16-game seasons. It’s hard to say whether Schwenke is healthier, however, since he has played a whole lot less in the last two years. The 27-year-old started at center for all of his games from ’13-’15, but served as an interior line reserve in ’16 and ’17. Schwenke’s 148 offensive snaps last year were not enough to qualify for a ranking, but his 60.4 overall score from Pro Football Focus left much to be desired.

With the Pats, Schwenke will try to hook on as a backup behind starting guards Joe Thuney and Shaq Mason and center David Andrews.

The Titans have reunited with center Brian Schwenke. To make room, fellow interior lineman Tim Lelito has been released.

Schwenke was with the Titans from 2013-2016 but he signed a one-year deal with the rival Colts in March. He did not make the team’s final 53-man cut, a surprise since the team is looking thin at center, and the Titans pounced on the opportunity to bring him back. Lelito struggled throughout the preseason, so it was a fairly easy call for the front office to make. If Schwenke stays healthy, he figures to be the first interior lineman off the bench to support guards Quinton Spain and Josh Kline as well as center Ben Jones.

Schwenke played in all 16 games last season, but injuries held him back in the previous three years. From 2013-2015, he missed 23 regular season games.