Matt Jones is finally off the Redskins and with another club. Per Tom Pelissero of the NFL Network (via Twitter), the Colts have claimed the former Washington running back off waivers. 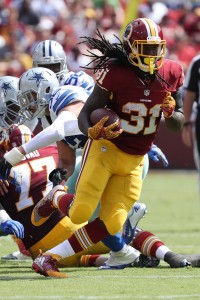 Jones fell out of favor with Washington early last season, his second year in the league, and he found himself on the trading block shortly thereafter. Jones’ former agent lobbied for a release in June, and Jones then switched representation to Drew Rosenhaus. Being a former third-round pick whose yards-per-carry average spiked by more than a yard to 4.6 per tote last season, Jones has plenty of promise, but his fumbling issues are a major concern; he has fumbled eight times over the past two seasons.

Still, Indianapolis makes plenty of sense as a landing spot. While the Colts currently employ the ageless Frank Gore as their starting running back, Father Time figures to catch up with Gore sooner rather than later, and Jones and rookie Marlon Mack could make a youthful and talented one-two punch in the Indianapolis backfield.