Byron Maxwell is going to be out for a while. ESPN’s Adam Schefter reports (via Twitter) that the Seahawks have placed the cornerback on the injured reserve.

After signing a lucrative six-year, $63 million contract with the Eagles back in 2015, Maxwell has bounced around the NFL. He had a brief stint with the Dolphins before returning to the Seahawks, who originally drafted him in the sixth round of the 2011 draft.

During his first ‘season’ back in Seattle (Maxwell was traded after appearing in two games for Miami in 2017), the cornerback compiled 38 tackles, seven passes defended, and one interception in seven games (six starts).

Despite serving as a starter down the stretch of the 2017 season, Maxwell was expected to play more of a reserve role in 2018. His placement on the IR likely means Tre Flowers or Neiko Thorpe will have a better chance of earning a roster spot behind Justin Coleman, Shaquill Griffin, and Dontae Johnson.

Cornerback Byron Maxwell and the Seahawks have agreed on a one-year deal worth up to $3MM, Adam Schefter of ESPN.com tweets. The signing may lessen the Seahawks’ need for cornerbacks as they head into Day 2 of the draft. 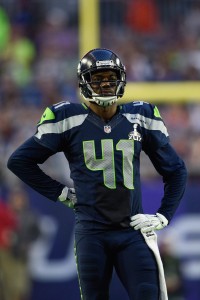 Maxwell, 30, spent the first four years of his career with the Seahawks before signing a free agent deal with the Eagles in 2015. Things didn’t pan out for him there – or with the Dolphins – but he found his way back to the Seahawks last year after Miami released him. Maxwell racked up 38 tackles, seven passes defensed, one forced fumble, and one interception in seven games for Seattle.

One of Richard Sherman‘s running mates for four seasons in Seattle, the final two of those being the Seahawks’ most successful years in franchise history, Maxwell came back to his original NFL team last season and filled in for a Sherman-less operation down the stretch. He’ll now attempt to do so again.

The Seahawks do not have a second-round pick, so bringing in a higher-ceiling corner wouldn’t be as easy in this year’s draft. Seattle has 2017 third-rounder Shaquill Griffin in line to work as a primary corner, joining former 49er Dontae Johnson. Former Patriot Justin Coleman is in the mix as well, but none have Maxwell’s experience in this system — one that’s steadily churned out corners despite the team not investing prime draft capital in the position.

Rodgers-Cromartie visited with the Redskins and had a meeting scheduled with the Saints, but it seems that New Orleans lost interest after signing fellow corner Patrick Robinson. The Redskins could still use an addition to their cornerback group, but it’s possible that their offer was not to DRC’s liking. Or, perhaps no offer was made.

Before he was released by the Giants, DRC reportedly agreed to play safety in 2018. That could be a solution for him if his market continues to stall.

The Seahawks are signing cornerback Byron Maxwell, a source tells Adam Schefter of ESPN.com (on Twitter). It’s a one-year deal for the veteran.

The deal brings Maxwell back to where he played his best football. His lucrative free agent deal turned out to be a mistake for the Eagles and the Dolphins couldn’t get much out of him post-trade, but he might be able to recapture some of his old magic with a return to Seattle. He’ll also have a huge opportunity to shine after Richard Sherman suffered a season-ending Achilles tear.

Coaches in Miami believed that Maxwell was going rogue and refusing to play the defenses called from the sidelines. That could indicate that Maxwell – now a much richer man than he was in 2014 – had lost motivation. It could also signal that he has lost a step and is no longer able to play press-man coverage against speedier receivers.

Before signing with Seattle, Maxwell also auditioned for the Falcons earlier this month.