Odell Beckham Jr. said earlier Saturday he would not hold out from training camp, taking a different line from some of his fellow high-profile 2014 first-round peers. But that doesn’t mean everything’s good on this front. 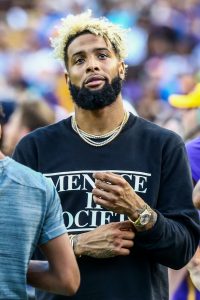 The Giants’ best player is entering a contract year and has been angling for an extension for some time. As of now, the sides are not close on terms, with Ralph Vacchiano of SNY.tv reporting there has been “no movement” in these re-up talks as of late.

Beckham plans to report to Giants training camp on time, but a source informed Vacchiano those plans could change if his contract negotiations continue to stall. The 25-year-old wide receiver showed up for OTAs and minicamp, despite recovering from an injury and with Khalil Mack and Aaron Donald skipping their respective teams’ offseason activities. But this impasse has generated headlines for some time.

Beckham seeks a contract that surpasses Antonio Brown‘s and makes him the league’s highest-paid pass-catcher. Although Beckham has no first-team All-Pro appearances on his resume, compared to Brown’s four, he has an obvious case to be this position’s highest-paid player. He’s four years younger than Brown and is vital to a Giants team that’s just made it clear it still believes in Eli Manning. For Big Blue’s offense to excel, it will need Beckham.

Big Blue is set to pay its No. 1 wide receiver $8.4MM this season on a fifth-year option. Brown earns $17MM per year. A $100MM pact for Beckham has been mentioned in this lengthy saga. It’s unclear exactly where Beckham wants to take the market, but 2014 draftee Mike Evans signed for $16.5MM annually earlier this year. That almost certainly won’t cut it with Beckham, but it may be clear the Giants — at least, at this juncture — do not view a deal that far surpasses that as realistic.

In the latter stages of his rehab from a broken ankle, Beckham ran routes but did not participate in team drills at minicamp. The Giants did not invest too much in the receiver position this offseason. They released Brandon Marshall and did not draft a wideout, perhaps showing confidence they can come to terms with Beckham — a trade-rumor subject earlier this offseason — before the start of the regular season. Although Dave Gettleman‘s taken hardline stances with Panthers players in the past, John Mara hasn’t made it a secret what he thinks about the LSU alum’s abilities.