Browns To Work Out Orleans Darkwa

The Browns will work out running back Orleans Darkwa on Monday, as Josina Anderson of ESPN.com tweets. Darkwa last played for the Giants in 2017 and is looking to make his NFL return.

Darkwa’s 2018 comeback attempt and workout tour was halted by a torn Achilles that knocked him out for the rest of the season. Now fully healthy, he’s looking to get back to the form he exhibited in 2017 when he rushed for 751 rushing yards and five touchdowns on 171 carries.

The Browns’ audition of Darkwa may be a prelude to granting Duke Johnson‘s trade request. As of this writing, the Browns refuse to move Johnson with the goal of keeping him as a backup to standout Nick Chubb and Kareem Hunt (once he returns from his eight-game suspension.)

For his career, Darkwa has 246 carries for 1,038 yards and nine touchdowns.

Orleans Darkwa Back To Full Health

Former Giants running back Orleans Darkwa is said to be “100%” recovered from his Achilles tear (Twitter link via Adam Schefter of ESPN.com). Darkwa is ready to sign with a team, Schefter hears, so it might not be long before he gets back on the gridiron. 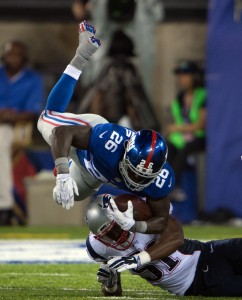 Darkwa tore the Achilles tendon in his right leg during an October audition with the Jaguars, a frustrating setback after he had a plate surgically removed from his leg last offseason. The 27-year-old was coming off his most productive NFL season in 2017, rushing for 751 rushing yards and five touchdowns on 171 carries.

Previously, the Giants offered him a contract that would have kept him in New York, and he also received interest from the Redskins, Patriots, and Bills. Darkwa turned down a one-year, ~$1MM contract from the Redskins in August of last year, but he might have to settle for a deal in that ballpark if he hopes to play in 2018.

Football Outsiders ranked Darkwa as a top-25 running back in both DYAR and DVOA in 2017, meaning that he was both effective overall and efficient on a per-play basis. Furthermore, Pro Football Focus’ advanced metrics highlighted his ability to create his own yardage.

Jerry Jones only helped add fuel to the fire today regarding Earl Thomas potentially joining the Cowboys. When asked if the organization would pursue some help at safety, the team’s owner made his answer pretty clear.

Of course, it’s important to note that Jones never explicitly mentioned Thomas, but it’s pretty easy to assume that the organization will pursue the veteran defensive back. The mutual interest between the two sides has been covered extensively, although the NFL recently made it clear that the Cowboys didn’t tamper when it came to the 29-year-old.

Of course, Dallas ultimately may look to leverage Thomas’ interest in joining the Cowboys. The team is projected to have around $50MM in cap space, but a solid portion of that total will go towards a DeMarcus Lawrence franchise tag and other extensions. As a result, the team may not have a whole lot of money to give Thomas.

Running back Orleans Darkwa is still without a job, but he had at least one opportunity to sign with a team before the start of the season. The Redskins tried to sign the ex-Giants running back in August, but rejected their offer of a one-year deal for the minimum salary, Peter King of NBC Sports hears.

The one-year, ~$1MM offer wasn’t good enough for Darkwa, but it was enough to get Adrian Peterson to sign. And, as it turns out, the chain of events worked out just fine for the Redskins. The 33-year-old Peterson is averaging 4.4 yards per carry through eight games, helping propel the Redskins to a 5-3 mark at the midway point.

“If we sign Darkwa, we wouldn’t have signed Adrian,”senior VP of player personnel Doug Williams said.

Darkwa’s last known audition came on Oct. 2 when he worked out for the Jaguars. He ranks as one of the best available running backs left on the market, but at this point, he may have to accept a minimum salary contract if he wants to play.

Adrian Peterson and Jamaal Charles made plans to visit the Redskins this weekend, following Orleans Darkwa in doing so. This effort to add a piece to a reeling backfield won’t be to bring in a starter but to add depth to a position group that needs it. Jay Gruden said (video link) his team is “covering our bases” in arranging visits with these free agent backs. Being merely a four-year veteran with a light carry history, Darkwa certainly has the most left in the tank. He led the Giants in rushing last season. Peterson, though, has recent experience fitting in quickly with a new team. Although he didn’t do well on a per-carry basis behind a struggling Cardinals offensive line, the future Hall of Fame back posted two 130-plus-yard performances last season — the first of which coming in his initial Cards game. Charles fell out of the Broncos’ rotation late in the season, but the two-time All-Pro made it through last year healthy and performed fairly well (4.3 yards per tote) before being shut down.

Washington lost Derrius Guice and has Samaje Perine and Byron Marshall on the mend. Here’s the latest from some of the Redskins’ rivals, along with news out of the AFC East.

The Redskins will host free agent running back Adrian Peterson on Monday, according to Ian Rapoport and Mike Garafolo of NFL.com (Twitter link). 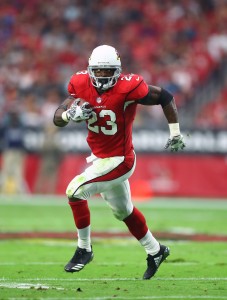 Guice was expected to handle early-down work for the Redskins, and that’s a role Peterson can conceivably still handle. However, the 2017 campaign wasn’t Peterson’s finest, as he averaged just 3.4 yards per carry on 156 rushes between the Saints and Cardinals. That was the second-lowest figure league-wide among backs with at least 150 carries, while Peterson also finished 46th among 47 RBs in Football Outsiders’ DVOA, meaning he wasn’t efficient on a per-play basis.

At his best, of course, Peterson is a Hall of Fame-caliber player, and he managed more than 1,400 yards on the ground as recently as 2015. His pass-game deficiencies aside, Peterson could give Washington a Guice replacement, one capable of handling running downs before ceding to Thompson on passing plays.

The Redskins worked out fellow running backs Orleans Darkwa and Jamaal Charles on Sunday, but it doesn’t appear Washington is in a hurry to sign either player, per Josina Anderson of ESPN.com (Twitter link).

Free agent running back Orleans Darkwa will work out for the Redskins on Sunday, according to John Keim of ESPN.com (Twitter link).

If he were injury-free, Darkwa almost surely would have landed a new contract by now, but a May surgery to remove a plate in his leg likely concerned interested clubs. Darkwa received medical clearance more than a month ago, but still has yet to find a new home.

Playing for the Giants in 2017, Darkwa posted the best campaign of his NFL tenure in by setting career-highs in starts (11), rushes (171), yards (751), and touchdowns (five). Football Outsiders ranked Darkwa as a top-25 running back in both DYAR and DVOA (meaning he was both effective overall and efficient on a per-play basis), while Pro Football Focus noted his ability to create his own yardage. Per PFF, Darkwa not only managed 67% of his rushing yards after first contact, but performed well in Yards Created, a metric which filters out game situation, score, offensive line performance, and other variables.

Thus far, the Colts, Patriots, Jets, and Bills have brought in the 26-year-old for a visits. The Jets reportedly don’t have any immediate plans to sign Darkwa, but the other clubs haven’t specifically ruled him out.