DeSean Jackson just signed a one-year deal with the Rams, and before that we hadn’t heard of much known interest in the speedster. That doesn’t mean that interest didn’t exist however. Speaking to the media after signing in Los Angeles, Jackson revealed he had other suitors. “There were other options out there,” Jackson said, via Michael David Smith of ProFootballTalk.com.

Jackson also explained his thought process in signing with the Rams, and it turns out their head coach was a big factor. “I could have went to other teams, other places. But my focus was really reuniting with Sean McVay. Talking to McVay once I was a free agent and really kind of having those open conversations, talking about the possibilities, it was something that was intriguing for me. So, I think that outweighs everything.” McVay coached Jackson during their time in Washington together, and it was reported at the time of signing that he played a role in recruiting Jackson to LA.

Josh Shaw has dropped the appeal of his gambling suspension, per Josh Alper of Pro Football Talk. ESPN’s David Purdum had previously reported that the Cardinals defensive back would appeal the ban, but Shaw has obviously changed his mind. 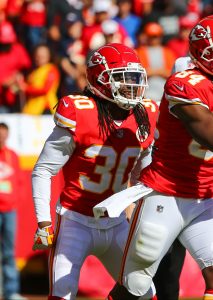 We learned at the end of November that the 27-year-old allegedly made a three-team parlay bet on Nov. 10 at Caesars Sportsbook. Shaw’s bet included three Week 10 games’ second halves, including a Cardinals-Buccaneers contest. The wager is not believed to have been successful. Nevertheless, Caesars contacted the Nevada State Gaming Control Board later on Nov. 10 and subsequently alerted the NFL.

Shaw was hit with a suspension that will last through the 2020 campaign, as the NFL strictly prohibits all personnel from betting on NFL games. He will be eligible to apply for reinstatement in February 2021.

The former Chiefs and Bengals DB signed a one-year deal with the Cardinals in the offseason. The fifth-year veteran has been on Arizona’s IR list all season, and he is not believed to have spent time with the team during that span (which is important in regards to inside information and the compromising of NFL games). However, his chances of returning to the league obviously took a major hit with these recent developments. The most recent known NFLer suspended for gambling on an NFL game while active was Ravens rookie quarterback John Stark in 1996. He did not return to the league.

In one of the most unusual Friday news dumps in many years, Cardinals defensive back Josh Shaw was suspended for the 2020 season for betting on NFL games. One of the bets Shaw made appears to have included the Cardinals.

Shaw is believed to have made a three-team parlay bet on Nov. 10, with the wager including a Cardinals-Buccaneers game, ESPN.com’s David Perdum reports. Made at Caesars Sportsbook, Shaw’s bet included three Week 10 games’ second halves. The wager is not believed to have been successful, per Perdum.

Nevertheless, Caesars contacted the Nevada State Gaming Control Board later on Nov. 10 and subsequently alerted the NFL, Perdum reports. Shaw is believed to have been open about his status as a pro athlete when filling out his betting account with Caesars, with Perdum adding that Shaw listed “professional football player” as his occupation.

The NFL did not conclude that Shaw used inside information to bet on games, but the initial release indicated the 27-year-old defender made at least three wagers on NFL games. The former Chiefs and Bengals DB signed a one-year deal with the Cardinals in the offseason.

The fifth-year veteran has been on Arizona’s IR list all season and is not believed to have spent time with the team during that span. But his chances of returning to the league obviously took a major hit with these recent developments. The most recent known NFLer suspended for gambling on an NFL game while active was Ravens rookie quarterback John Stark in 1996. He did not return to the league.

Josh Shaw will draw a season-long suspension. The NFL suspended the fifth-year defensive back for the entire 2020 season for betting on NFL games. An appeal must be filed within three days.

Currently stationed on the Cardinals’ IR list, Shaw bet on multiple games this season, according to the NFL. While a league investigation did not find Shaw to have used inside information, this is still a major development. The nature of this infraction certainly makes the Friday after Thanksgiving a logical target for this news dump. Shaw cannot apply for reinstatement until Feb. 15, 2021.

“The continued success of the NFL depends directly on each of us doing everything possible to safeguard the integrity of the game and the reputations of all who participate in the league,” Roger Goodell said in a statement. “At the core of this responsibility is the longstanding principle that betting on NFL games, or on any element of a game, puts at risk the integrity of the game, damages public confidence in the NFL, and is forbidden under all circumstances. If you work in the NFL in any capacity, you may not bet on NFL football.”

While this will not register on the same level as Paul Hornung and Alex Karras‘ season-long gambling bans in 1963, with Shaw being a journeyman, it’s still quite the late-season development. It is not known if Shaw bet on Cardinals games, though Kent Somers of the Arizona Republic tweets Shaw is not believed to have been around the team since going on IR in August.

Shaw, 27, was a 12-game Bengals starter in 2016. The 2015 fourth-round pick played at Florida and USC and has spent most of his career as a backup with the Bengals, Chiefs and Buccaneers. The Cardinals signed Shaw to a one-year, $895K deal in March. This ban certainly puts the veteran defender’s career in jeopardy.

The Chiefs have waived defensive back Josh Shaw, according to a team announcement. Shaw hooked on with the Chiefs in October, but his time with the club is up after appearing in just four games.

Shaw served as a reserve and special teamer in Kansas City, compiling four total tackles in his short run. Prior to that, he spent three years with the Bengals, including the 2016 season in which he started 12 contests.

With experience at cornerback and safety, Shaw could find interest from teams for the final half of the season. If he clears waivers, he’ll be free to hook on with any club.

The Chiefs, says the former fourth-round pick, will face the Rams on Monday night in one of the year’s most highly-anticipated matchups. Barring another roster change, the Chiefs will have five true corners on the roster in Kendall Fuller, Steven Nelson, Orlando Scandrick, Charvarius Ward, and Tremon Smith.