Browns To Work Out Reuben Foster

The Browns will audition Reuben Foster on Friday, according to a source who spoke with Kimberley A. Martin of ESPN.com (on Twitter). Foster probably won’t be signed straight away, but he could be a candidate for the roster after Sunday’s game against the Texans. 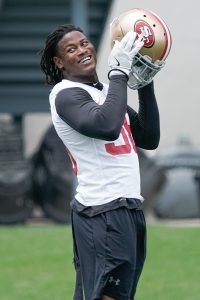 Foster has been making the rounds recently. He worked out for the Jaguars and Jets earlier this month but left both meetings without a deal.

The Browns rolled the dice on defensive tackle Malik McDowell earlier this year and the (very) early returns are promising. McDowell played on 45 of team’s 65 snaps against the Chiefs, en route to an 83.3 grade, the highest of any Cleveland defender. Despite all of his off-the-field issues, Foster could offer similar upside.

Foster has hardly been seen since he was released by the Niners three years ago. Washington shocked the world by claiming him off of waivers, but never saw the field in D.C. Foster suffered an ACL tear in 2019, further pushing his career off course. He also spent 2020 on IR. Between the suspensions and injuries, the 27-year-old has played just 16 total games as a pro.

5 comments on “Browns To Work Out Reuben Foster”