The Saints will be down a running back for the new few weeks, so the team is bringing in reinforcement. New Orleans has signed running back Devine Ozigbo off the Jaguars’ practice squad, reports Aaron Wilson (via Twitter).

This is a bit of a homecoming for Ozigbo, as the Nebraska product joined the Saints as an undrafted free agent in 2019. He eventually moved on to Jacksonville, and he spent the next two-plus seasons with the Jaguars organization. He ultimately saw time in 18 games for the team, collecting 93 yards from scrimmage on 22 touches. The 25-year-old has also spent a significant amount of time on special teams.

The Saints needed some running back depth following news that Tony Jones Jr. would miss the next three to four weeks (per ESPN’s Adam Schefter on Twitter). The 23-year-old has seen time in all four games this season, collecting 87 yards from scrimmage on 23 carries. Other than Ozigbo and starter Alvin Kamara, the team’s only other healthy RB is Dwayne Washington (plus versatile wideout Ty Montgomery).

New Orleans might not be done adding to the position. Schefter reports that the team also auditioned a number of veteran RBs today, including Lamar Miller, Duke Johnson, Brian Hill, Ito Smith, and Ryquell Armstead.

Smith has the most experience among the four, seeing time in 35 games in three seasons with the Falcons. This included a 2020 campaign where he finished with 343 yards from scrimmage and one touchdown. The 26-year-old caught on with the Vikings this offseason but was let go before the regular season.

Armstead got into 16 games as a rookie with the Jaguars in 2019, finishing with 252 yards from scrimmage and two touchdowns. He sat out the 2020 season while dealing with issues from COVID-19, and after getting claimed by the Giants in May, he was waived by his new team in June. Pierce, a 2020 undrafted free agent out of Oregon State, saw time in five games with the Bears last season, rushing for 34 yards and one touchdown on six carries. Hilliard, 26, saw time in 30 games for the Browns in two-plus seasons with the organization.

White suffered a hip injury during Sunday’s loss to the Saints, and the veteran will be sidelined for the foreseeable future. The team is already rostering four other RBs in Damien Harris, J.J. Taylor, rookie Rhamondre Stevenson, and special teamer Brandon Bolden.

Ryquell Armstead‘s stint in New York has ended. The Giants have waived the running back, according to Dan Salomone of the team’s website (and later passed along by the organization on Twitter). 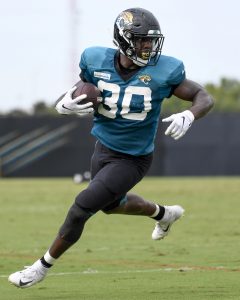 The Temple product entered the NFL as a fifth-round pick by the Jaguars in 2019. During his rookie season, Armstead served as Leonard Fournette‘s primary backup, collecting 252 yards from scrimmage and two touchdowns. He got a start for Jacksonville in their 2019 season finale, finishing the game with more than 50 receiving yards and a score.

Armstead had several stints on the COVID list in 2020, and he reportedly had a pair of hospital visits while dealing with respiratory issues. As a result, the running back ended up missing the entire season, and he was waived by the Jaguars back in May.

The Giants calimed Armstead shortly thereafter, but he only stuck with his new team for about a month. The 24-year-old was competing with the likes of Devontae Booker, Elijhaa Penny, and Corey Clement for backup reps behind Saquon Barkley.