Jettisoned by the Broncos during a rather eventful week for that franchise, Michael Ojemudia will have another chance. He did not make it too far down the waiver order, either. 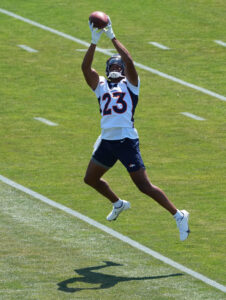 The Bears used their No. 2 waiver spot to pick up the third-year defender. Ojemudia’s third-round rookie contract runs through 2023, giving the Bears an offseason to gauge his fit in Matt Eberflus‘ defense. To make room on their 53-man roster, the Bears waived veteran defensive end Taco Charlton.

Ojemudia has only one season to really measure in terms of NFL performance. A Broncos team limited at corner turned to the Iowa alum for 11 starts in 2020. The 6-foot-1 corner allowed a 103.2 passer rating as the closest defender and yielded three touchdowns. Ojemudia’s 852 defensive snaps in 16 games that season were not indicative of his NFL trajectory, with injuries largely defining his next two seasons.

A hamstring injury kept him off the field for most of last season, and a dislocated elbow cost him a chunk of this year’s campaign. Ojemudia, 25, played just one defensive snap for the Broncos this season. The Bears, however, are playing out the string at corner and could use assistance. After placing safety Eddie Jackson on IR, Chicago moved corners Jaylon Johnson and Kindle Vildor to its injured list. All three are out for the season’s remainder.

Charlton, 28, played in five Bears games but did not record a sack. The former first-round pick has seen action with five teams over the past five seasons, moving from Dallas to Miami to Kansas City to Pittsburgh to Chicago.

The Bears acquired some depth on the defensive line today, signing former first-round pick Taco Charlton from the Saints practice squad, according to Brad Biggs of the Chicago Tribune. Additionally, the Bears activated linebacker Matthew Adams from injured reserve.

Charlton has had a rollercoaster of a career through six seasons. He’s coming off of a down season in Pittsburgh where the Steelers barely used him. As a rotational pass rusher, Charlton only played more than half of the team’s defensive snaps twice in the season. In his lone start, he earned his only half-sack and a quarterback hit. In the only other game that saw him play more than half the Steelers’ snaps, he recorded his only other quarterback hit of the season.

Charlton hasn’t played a full season since his rookie year for the Cowboys in 2017. Since then, injuries and inactive periods for other non-disclosed reasons have kept him off the field for weeks at a time. He signed with the Saints early in the offseason but was cut and signed to the practice squad at the roster cut deadline.

Adams is a reserve linebacker and core special teamer for the Bears. He was placed on IR after suffering a calf injury in the team’s Week 5 loss to the Vikings. His return adds some depth to the linebacking position behind starters Jack Sanborn, Joe Thomas, and Nicholas Morrow.

To make room for Charlton on the active roster, Chicago released linebacker A.J. Klein with a non-injury settlement agreement, according to Aaron Wilson of Pro Football Network. Klein was acquired in the trade that sent star linebacker Roquan Smith to Baltimore. Klein appeared in each of the Bears’ last two games, playing sparsely on special teams. His departure is quickly remedied by the return of Adams.

The Saints have made two additions to their defense. The team has announced the signings of defensive end Taco Charlton and safety Justin Evans.

Charlton was highly touted when he began his NFL career in 2017 with the Cowboys. He only lasted two years in Dallas, though, posting four sacks in 27 games. That led to his release in September 2019, which began the streak of current one-year stints he is now on.

The Michigan graduate joined the Dolphins after his release from Dallas, and enjoyed his best campaign there. He recorded five sacks in 10 games, but that wasn’t enough to extend his stay with the team. He next found himself in Kanas City, then Pittsburgh last year. Between those two campaigns, he totalled 2.5 sacks in 18 contests. Still only 27, Charlton could fill at least a depth role in the Saints’ edge-rush department.

Evans, meanwhile, hasn’t played in the NFL since the 2018 season. A second round pick in 2017, he dealt with injuries throughout his brief tenure in Tampa Bay. Starting 21 of 24 games, the 26-year-old made 125 tackles, adding four interceptions and eight passes defensed. If he can stay on the field, his production shows that he is capable of being an impact defender; given his time removed from the game, however, a backup role would be a more realistic expectation.

With areas of last season’s top-five scoring defense having undergone significant, these two moves will add depth for the Saints, while providing, potentially, upside at each position.

The Steelers have signed Taco Charlton to their 16-man practice squad, per an official club announcement. The defensive end will look to impress on the practice field and see his first live action of the 2021 season.

Charlton, once a highly-touted first-round pick of the Cowboys, flamed out quickly in Dallas. After just two-plus years with the Cowboys, he moved on to the Dolphins and did his best work in 2019 — five sacks in ten games. He had a decent 2020 with the Chiefs too, up until he broke his leg in November. He finished out with two sacks, four quarterback hits, and a forced fumble for KC. However, the 26-year-old (27 in November) wasn’t able to make the cut.

His first opportunity could come quicker than expected since T.J. Watt is dealing with a groin injury. Fortunately for the Steelers, the latest word is that Watt should be able to play on Sunday against the Bengals.